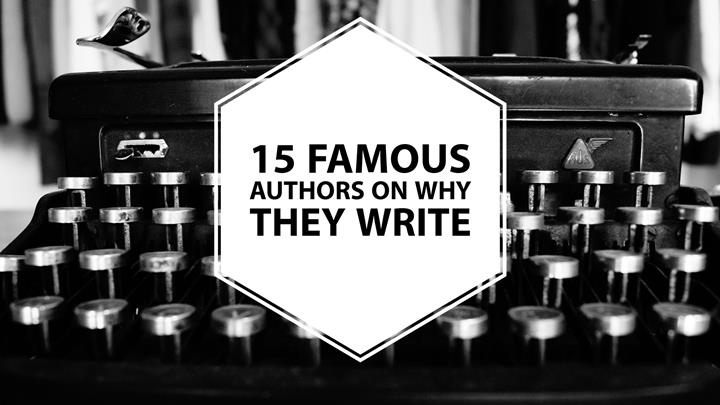 15 Famous Authors On Why They Write

15 Famous Authors On Why They Write

White Noise novelist Don DeLillo wrote a letter that appeared in the April 1996 issue of Harper’s, featured in Jonathan Franzen’s article, “Perchance to Dream.” The essay explored the roles of authors, readers, and written works in America. The Cosmopolis writer — who recently had his 2003 book adapted for the screen by David Cronenberg — called writing a “personal freedom,” and dismissed any romantic notions about the profession. “It frees us from the mass identity we see in the making all around us. In the end, writers will write not to be outlaw heroes of some underculture, but mainly to save themselves, to survive as individuals.”

DeLillo expounded upon his reasons for writing in an earlier article by William Leith in 1991. “I write to find out how much I know,” he said. “The act of writing for me is a concentrated form of thought. If I don’t enter that particular level of concentration, the chances are that certain ideas never reach any level of fruition.”

“The best thing about writing fiction is that moment where the story catches fire and comes to life on the page, and suddenly it all makes sense and you know what it’s about and why you’re doing it and what these people are saying and doing, and you get to feel like both the creator and the audience. Everything is suddenly both obvious and surprising… and it’s magic and wonderful and strange.”

Byron blamed inactive writing periods, not the syphilis he contracted, for his lunacy. ”If I don’t write to empty my mind, I go mad,” he once confessed.

Stephen King’s memoir On Writing offers advice about the craft through tales of his childhood, the struggles he faced early in his career, and life-changing incidents like the near-fatal accident the author had in 1999. He describes the best kind of writing as “intimate,” and said that in the end all writing is about “enriching the lives of those who will read your work, and enriching your own life, as well.” Although many imagine the author brooding at his desk while working on his next novel, King’s ultimate reasons for writing are far more cheerful than that. “It’s about getting up, getting well, and getting over. Getting happy, okay? Getting happy,” he said.

“Writing is the only thing that, when I do it, I don’t feel I should be doing something else.”

The Breakfast at Tiffany’s and In Cold Blood author put a great emphasis on his prose style, aiming for precision, clarity, and a lush, descriptive voice. It was deceptively simple at times, but his word choices were often beautiful in their effortlessness. ”To me, the greatest pleasure of writing is not what it’s about, but the inner music that words make,” Capote once said, perfectly summarizing his style.

“Writing is the supreme solace.”

In a 1926 review of Hemingway’s first novel The Sun Also Rises, the New York Times described the “gripping” story as “lean, hard, athletic narrative prose.” The same easily applies to the author’s body of work, an approach known as Hemingway’s “Iceberg Theory.” His “most from the least” methods were summed up in this statement from the author: “My aim is to put down on paper what I see and what I feel in the best and simplest way.”

If you’ve been wondering what kind of wisdom Discworld writer Terry Pratchett has been hiding under his massive hats, it’s quite simple. He makes work, because “writing is the most fun you can have by yourself.”

Mickey Spillane viewed writing the way his fictional hard-boiled hero Mike Hammer looked at life. The author felt age and experience made him better, and he pressed on for that very reason. “If you’re a singer you lose your voice. A baseball player loses his arm. A writer gets more knowledge, and if he’s good, the older he gets, the better he writes,” Spillane elucidated.

Sometimes the motivations to write can be as different as night and day:

“Writers write about what obsesses them. You draw those cards. I lost my mother when I was 14. My daughter died at the age of 6. I lost my faith as a Catholic. When I’m writing, the darkness is always there. I go where the pain is.”

“I loved words. I love to sing them and speak them and even now, I must admit, I have fallen into the joy of writing them.”

Determined, but feeling broken after several bouts of illness and financial ruin, Fitzgerald’s deeply personal essays and letters were collected in Edmund Wilson’s The Crack-Up after his death in 1940. “You don’t write because you want to say something; you write because you’ve got something to say,” the Great Gatsby author wrote in a moving passage. Although often somber in tone, Fitzgerald’s perceptive tone recalls the reasons why we adore his novels in the first place.

On her website, Judy Blume shares a number of tips and personal stories with would-be authors seeking advice and a starting point. “Those of us who write do it because there are stories inside us burning to get out. Writing is essential to our well-being,” she shares. It’s a sentiment that many of the authors on our list have explained, but a PBS interview with the Are You There, God? It’s Me Margaret writer describes something more revealing and equally, beautifully honest. She told the network about her struggle searching for books she could identify with as a child — ” families like my family,” she explains, “Which wasn’t perfect; it was a loving family, but it wasn’t perfect. And I knew, you know, there were secrets within families.” Blume ”wanted to write what [she] remembered to be true,” especially since she admits that the “voice in [her] head was the voice of a child.”

The Madame Bovary writer died penniless, but he was a painstakingly dedicated and detailed scribe who worked tirelessly even though his output never matched his peers. Flaubert’s famous line, “Writing is a dog’s life, but the only life worth living,” doesn’t mince words and mirrors his tenacious approach to the craft. “I write entirely to find out what I’m thinking, what I’m looking at, what I see and what it means. What I want and what I fear. Why did the oil refineries around Carquinez Straits seem sinister to me in the summer of 1956? Why have the night lights in the bevatron burned in my mind for twenty years? What is going on in these pictures in my mind?”

by Alison Nastasi for Flavorwire