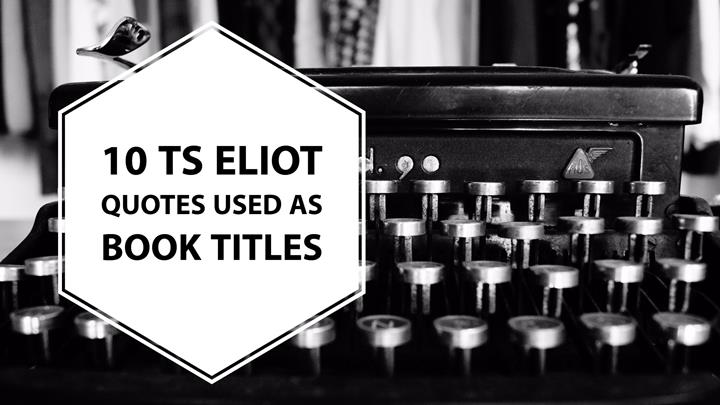 TS Eliot was a publisher, playwright, and literary critic. He is known as the most important English poet of the 20th century. Born an American, he was naturalised as a British subject in 1927.

On the Beach by Neville Shute

‘We grope together / And avoid speech / Gathered on this beach of the tumid river’. Its title taken from The Hollow Men, Shute’s novel depicts a world after a nuclear war, as Australians wait for the radioactive clouds to creep southwards. The first edition of the novel included an epigraph from Eliot’s poem: ‘This is the way the world ends / Not with a bang but a whimper’.

Who Is the Third that Walks Beside You by William Burroughs

From the ‘What the Thunder Said’ section of The Waste Land, Burroughs’s title for his ‘cut-up’ verbal collage, prose reassembled in columns, declares it to be a homage to the experiments with quotation that Eliot initiated.

No Longer at Ease by Chinua Achebe

‘We returned to our places, these Kingdoms, / But no longer at ease here, in the old dispensation, / With an alien people clutching their gods.’ Achebe’s novel takes its title from The Journey of the Magi and tells of how Obi returns to Nigeria after several years studying in England. He finds he now has no secure place in his homeland, and is sucked into corruption.

The Grass Is Singing by Doris Lessing

Lessing’s first novel is set in Rhodesia, where Mary Turner is married to an impecunious farmer. Slowly she begins to develop a relationship with Moses, one of their black servants. We know from the first page that the relationship will end with her murder. The title comes from The Waste Land: ‘In this decayed hole among the mountains / In the faint moonlight, the grass is singing.’

The Skull Beneath the Skin by PD James

James’s whodunit gets its title from Eliot’s Whispers of Immortality, a meditation on John Webster’s grisly Jacobean tragedies. ‘WEBSTER was much possessed by death / And saw the skull beneath the skin … ’ In James’s novel, Clarissa Lisle is murdered on the eve of her appearance inThe Duchess of Malfi.

Time to Murder and Create by Lawrence Block

Block is another crime writer to toy with Eliot, taking his title from The Love Song of J Alfred Prufrock. The boozy ex-cop Matthew Scudder works as a private investigator, probing the death of a well-known criminal.

The Wire in the Blood by Val McDermid

McDermid has a penchant for Eliot quotations, and takes this one from The Four Quartets. ‘The trilling wire in the blood / Sings below inveterate scars.’ Profiler Dr Tony Hill hunts a serial killer whose identity the reader knows in advance. The title seems to tell us of the passions that arise from painful wounds.

The title of Banks’s ‘space opera’ is taken from the fourth part of The Waste Land, ‘Death by Water’. The shape-changing protagonist Horza is a sci-fi version of a shipwrecked sailor, who falls in with a band of pirates caught in a galaxy-spanning war between empires. The title has a message to every would-be hero. ‘Consider Phlebas, who was once handsome and tall as you.’

A Cold Coming by Tony Harrison

The opening phrase of The Journey of the Magi is the title of Harrison’s indignant poem occasioned by the first Iraq war. It contrasts the fate of Saddam’s troops, burned to death in an air strike, with ‘three wise soldiers from Seattle who banked their sperm before the battle’.

A Handful of Dust by Evelyn Waugh

Waugh’s novel takes its title from The Waste Land. Tony Last sees his marriage collapse as his wife Brenda fixes her passions on the worthless John Beaver. A tale of upper-class adultery becomes a modern parable of futility. ‘I will show you fear in a handful of dust.’