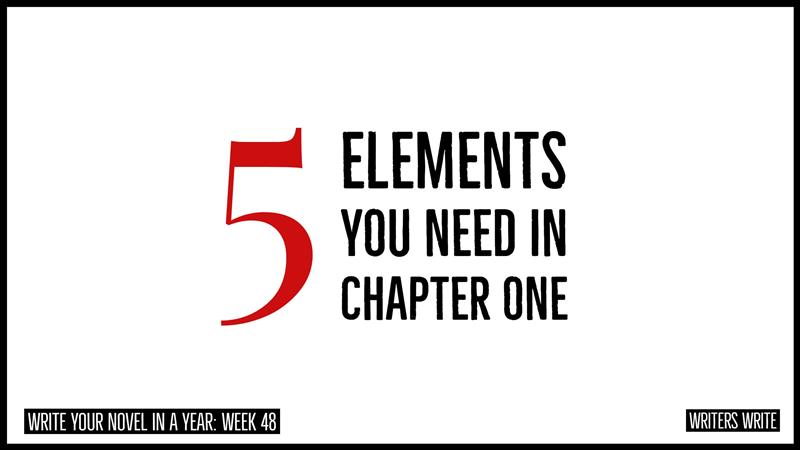 Write Your Novel In A Year – Week 48: 5 Elements You Need In Chapter One To Hook Your Reader

This post will help you define the 5 elements you need in chapter one to hook your reader.

Welcome to week 48 of Anthony’s series that aims to help you write a novel in a year. Read last week’s post here.

Your first chapter is the window to a showroom, beckoning us with a display of shiny new cars that promise adventure, an exquisite new dress in a shop window that hints at romance, or a candy display at a market promising the best sugar high ever.

5 Elements You Need In Chapter One To Hook Your Reader

1. The first line is your last chance to grab the reader.

‘My father took one hundred and thirty-two minutes to die.’ This is the first line of Melina Marchetta’s Young Adult novel, Jellicoe Road.  It would be hard not to read on from that first line, wouldn’t it?

I’ll make a confession. For the last few nights, I’ve stared at my opening line. I’ve rewritten it, deleted it, scratched out a previously discarded version – I’m still not happy with it.  I’m obsessed with it – you could say I want too much from it.  I want it to be perfect.  Maybe that’s not a bad thing.

There’s an exception for every rule, I know, and I think we should be aware of that. The first line should be simple – no more than 10 or 12 words. But they can be complex too, if that’s the style of your novel. It can be surprising, tense, absurd – but it should grip the reader.

The first line can be a sledgehammer breaking its way into an action-packed narrative. It can be a soft feather to tickle and entice the reader into a romance. However, you can try too hard sometimes. If you force something dramatic the result will come across as contrived.

In essence, I think it’s about giving the reader a way into your story – it’s about picking up a thread, opening a door for a glimpse inside and engaging the senses.

2. The world on the first page.

When we’re writing our opening scene or chapter, we’re building a bridge between the world outside of the covers of the book and the fictional wonderland within. It’s like a child’s pop-up book – but you have to build that cardboard castle with words. You have to engage the reader’s senses, colour their imagination.

I find it’s always best to start orientating the reader sooner rather than later – in other words, point them towards north. For me, that’s about giving a sense of setting — a fantasy kingdom or downtown Miami, it doesn’t matter, let us know the frame. That takes care of the pictures in their mind.

Next comes the style. This is where a lack of confidence as a writer will trip you up. The voice of your story must come through — from the tone to the theme, this must be the most consistent element throughout your entire novel, so it’s important to get it pitch perfect. Whether you’re using a first-person narrator or a third-person viewpoint, we must trust the voice of the story.

3. An unforgettable character or characters.

, we open on a cold mist-shrouded scene in the Himalayan mountains — and a house occupied by three characters: a girl waiting for her tutor, an old man waiting for his tea, and a cook waiting for a letter from his son in America.

Even though the story unfolds at a slow pace, we’re introduced to the characters that hold the story together. We identify with them, and they start to come alive in our imagination. That’s all the reader wants from the opening pages.

4. A challenging or thought-provoking question.

One thing we tend to forget about readers is that they love to believe they’re one step ahead of the story. Paradoxically, they love to be proved wrong – they’re waiting for the trapdoor. Waiting for you, as the author, to surprise them.

What’s going to happen in this story? What is this character all about? How would I react in that situation? These are all questions that play at the corners of our minds when we’re reading. The mistake we as writers make is that we try to answer all those questions in the first chapter. Don’t.

If your reader is a fish, you should be drawing them in with a beautiful lure, not blowing them out of the water with dynamite. On the other hand, you don’t want to give them just one sad worm at the end of your hook. Balance is critical. It has to be just enough.

5. A last page that promises more.

The last page of your chapter is not the most important page in your book – it’s not where you make the sale. It’s cocktail hour, an hors d’oeuvre, rather than the raucous party that’s waiting deeper in the book.

For this reason, and it’s a personal reason, I don’t like emphatic endings to chapter one. I prefer a little mystery, something elliptical … something that will lead me seamlessly into the next chapter. Of course, you can end chapter one with a bang but just remember you only have another five bullets left in the chamber. Use them sparingly.

‘Another word for talent is obsession.’  — Marion Dank Bauer