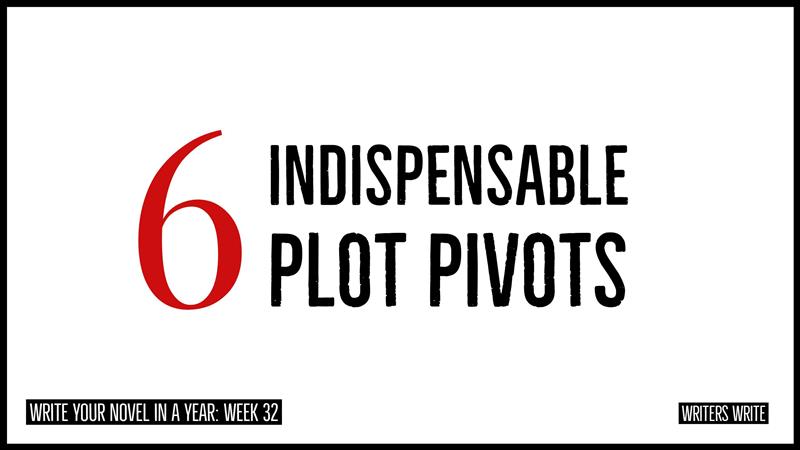 Write Your Novel In A Year – Week 32: Your 6 Indispensable Plot Pivots

Writers Write creates writing resources. In this post, we look at the six indispensable plot pivots you need when you’re writing a novel.

Welcome to week 32 of Anthony’s series that aims to help you write a novel in a year. Read last week’s post here.

In Novel Shortcuts, a great guide to drafting a novel, Laura Whitcomb talks about story ‘crosshair moments’ that fall on the turning points of a story. Those moments when your main character is in the firing line – figuratively or literally.

As I’m reshuffling or rewriting some scenes in my novel, I’m looking for these pivotal moments throughout my manuscript. Keep in mind a pivot is something that can turn – so these are moments that should ‘spin’ your story in a new or different direction.

But it’s important, I think, to first focus on the six indispensable plot moments in your novel. Once you isolate these moments you can see what you have to build towards.

Pivot One: The most important plot point in the beginning of your novel is the inciting incident. To remind you, this is the moment you main character brushes up against the thing or person that will eventually change their world irrevocably.

Pivot Two: At the end of the beginning of your novel, you also need to have the First Major Turning Point. This is the scene that propels the main character into the middle of the story.

It is the first real crisis in the story and stems from the inciting incident. This crisis usually ends in a mini-climax of its own. The main character, after accepting what has happened, is forced to make a new decision or is determined to pursue a new course of action.

Pivot Three: Right in the middle of your novel, you have to write a strong Midpoint. This is one of the most important plot points in your novel. It is the first culmination of your novel. This is probably the most pivotal moment, because so much hinges on this moment or plot point.

Pivot Four: And then later, just before you move into the end of your novel, you have the Second Major Turning Point. This is the second culmination of your story. Showdown time!

Whatever happens here must push the character into the final stretch of the story. The tension should still be high. What decision or action will they take to test if they truly win – or truly lose?

The two most important plot points at the end of your novel are the climax and the denouement.

Pivot Five: The Climax is the last test for your main character. You can spin in another direction – and bring in a twist – but after that your character has reached the end of their journey or fight. They’ve learned their lesson – for better or worse. The tension is finally released.

Pivot Six: The last few scenes is the denouement. Here you must wrap up and tie up all the loose ends. What does the main character’s life look like now after the action is over? What glimpse can we give of their future?

‘The crosshairs of a story, like the crosshairs in the scope of a rifle, must be precisely aimed at your target – that most pivotal moment in your plot.’  — Laura Whitcomb