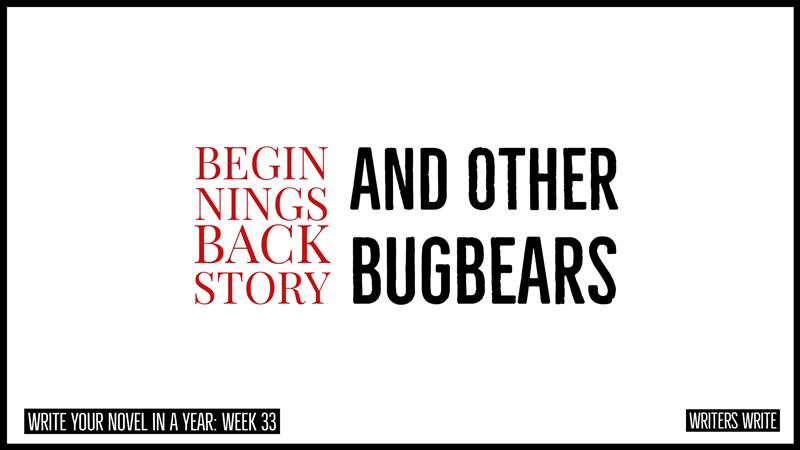 Writers Write creates writing resources. In this post, we cover the problems writers encounter with beginnings and backstory.

Welcome to week 33 of Anthony’s series that aims to help you write a novel in a year. Read last week’s post here.

The true start and the false start

Where does your story start? What does page one look like?

As I come to the end of my draft stage and feel ready to attack my messy and chaotic manuscript, I’m looking for a way to rework my opening scene – that scene that must pull the reader in and get them hooked on the story.

I’ll admit I’ve had a few false starts. Like starting too far back from the inciting incident – taking too long to set up the world of the story. And, of course, starting too close to the moment of change – and not giving the reader enough context about what’s going on.

In a novel I’m reading, the first scene takes place as a journalist interviews a man condemned to die in the electric chair. This was a powerful scene to kick off a story – it certainly had me gripped. It made me realise that those big moments – life, death, birth – are always good places to start.

I’ve decided to start my story as close to the point of attack as possible. I’ve created a teaser that gives the reader a glimpse of what will happen just before the major climax at the end of the story.

The good news is that I’m starting in the thick of it, in the heart of the drama – in media res, as they call it. It’s an action scene and it fairly races with action and adrenalin.

However, it seems to be working. It seems like a natural hook for the story. The violent weather, I feel, is almost like another character – an element that is commenting or hinting at the violence that is about to unfold. And the character, while he is alone, is driven by a strong goal – he is on a mission for revenge.

Sometimes you have to throw the rule book out the window and listen to your story, don’t you think?

As I work on the earlier scenes in my book, I realise I haven’t addressed a lot of the backstory.

For example, when I look at when Jenna and Matt – my two lovers – met, I know that it happened four or five years ago.

When I look at Jenna’s age, I realise that she was pretty young when she met Matt – which is either a good or a bad thing.

But the big black hole was, of course, how they met. How did they become lovers? How did the relationship evolve? And why did it hit a stalemate or stasis as the story opens?

As I wrote some backstory scenes and notes – none of which I liked, by the way – I realised two things.

Well, at least, not all of it. If it’s important to the story in the present, yes, you may need to introduce it through the narrative or as an isolated flashback scene – but if not, I don’t see a reason for it to be in the final manuscript.

Stories live in the ‘now’ – readers want the immediacy, the tension, the flow as if it’s unfolding in real-time. They don’t want to be hauled back into the past.

This last week has been challenging – both in my writing and my personal life. The one that causes me the most distress is, of course, my writing. I mean I can always pay my taxes some other time. But the fear that my talent has dried up and disappeared – that’s something that will cause you to curl up in a sorry heap.

On Saturday, I sat down to write a scene and it just didn’t come. I soldiered on and what I produced was a dry, clumsy piece of writing – more like a DIY manual than a chapter in what’s meant to be an exciting thriller.

In archaic English, a bugbear was an imaginary being invoked to frighten children, typically a sort of hobgoblin supposed to devour them. Seeing as how writers are basically children with laptops, I felt this bugbear descend on me Saturday night.

On Sunday, I cleaned bathrooms, washed dogs, and tried not to think about that awful scene. In the late afternoon, I cautiously approached it again.  I took a deep breath and attacked it and it came out a lot better. Sigh of relief! I was safe for another day.

‘Backstory is like creating a “connect-the-dots” picture – you just need the dots. The reader will draw the lines.’ — Jamie Ford

Explore: Anthony Ehlers, Beginnings, Write Your Novel In A Year