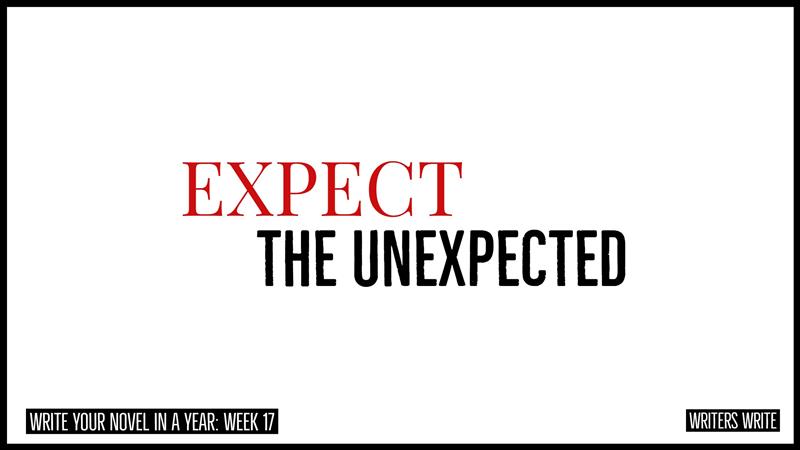 Write Your Novel In A Year – Week 17: Expect The Unexpected

In this post, we look for ways for you to keep your readers and your characters on their toes. We suggest ways to expect the unexpected in your novels.

Welcome to week 17 of Anthony’s series that aims to help you write a novel in a year. Read last week’s post here.

[The 52 posts in the series are also available in a downloadable, advert-free workbook. Click here to buy it: Write Your Novel In A Year Workbook]

Looking for the unexpected

When it comes to keeping your characters – and your readers – on their toes, you have to look for opportunities to throw some unexpected roadblocks in their path. These can be small or big – but they need to add a bit of a twist to the plot, or show your character in a different light.

I’m reading a story now. A journalist is flying to London to start a new assignment for a magazine. After heavy turbulence, the plane is forced to land in Frankfurt. The character certainly wasn’t expecting this and, as a reader, I wasn’t expecting it. What will happen during this layover?

Remember even a short trip to the corner supermarket or dropping the kids off at school can offer you an opportunity to change your characters’ lives in some way. What if there’s a gunman at the supermarket? What if the bedraggled single mom bumps into her handsome ex-boyfriend? What if he’s the new headmaster? Look for these opportunities in your synopsis, and see if they can add a twist to your novel.

As I said, the unexpected can be a reaction by a character. In the exquisite novel, Forbidden Colours, by Yukio Mishima, the main character is an ageing novelist. When he discovers his young mistress is having an affair, he follows her and her new lover to the coast.  Instead of confronting her, he instead becomes obsessed with her young boyfriend and starts a dangerous friendship with the boy.

In my novel, I have a similar character turnaround. As I get to know my heroine’s boyfriend, Matt, a bit better, I’ve realised he could have a very strong reaction to the young interloper in their relationship, Monty. His jealousy of Jenna and Monty is unpredictable and could push him to the edge. It makes for exciting writing.

My friend André can blow smoke rings. Not just normal smoke rings – he can blow a giant smoke ring and push smaller concentric rings through the middle of it. This was something I had to ‘steal’ for one of my characters and immediately told him as much. ‘I’ll have to watch what I say and do around you,’ he said. ‘Do writers steal everything?’ (The answer is, of course, yes.)

The quirks of our friends, families, and loved ones are what endear them to us. It makes sense then to make sure your characters also have little idiosyncrasies that will make them seem real not only to your readers, but also to you as the writer.

It’s even better when you can link a habit to a plot point. In my novel, for example, my heroine, Jenna habitually walks barefoot when at home – when she cuts her foot on some broken glass, she is not as agile as she normally is. Who knows? This could slow her down when she’s trying to run away from, say, an obsessed stalker. What ever happened to…?

Sometimes, when I’m stuck on a particular scene or just need a break, I plonk myself down in front of VH1 and take a short nostalgia trip into the land of 1980s and 1990s pop music. Watching Christopher Cross’s ‘Arthur’s Theme’, I wondered what became of this artist, the Ed Sheeran of his day? A quick Google search showed me he is still making albums and touring. (Ha, fancy that!)

Another way to bring in the unexpected into your novel is to introduce old friends, colleagues, or lovers into the storyline. This worked well for me. While out dining, Jenna and Matt run into Jenna’s ex-boyfriend, Tate. In fact, Tate is a catalyst for what happens in the early part of the story.

Who could you bring into your story from your characters’ pasts? Maybe it’s a great aunt, an old school chum, or the priest that baptised your villain.  Look for ways to bring them into the story.

‘A cliff-hanger provides a great opportunity to transition to another point of view or transition in time.’ — Randall Platt

Look out for the next instalment of Write Your Novel In A Year!