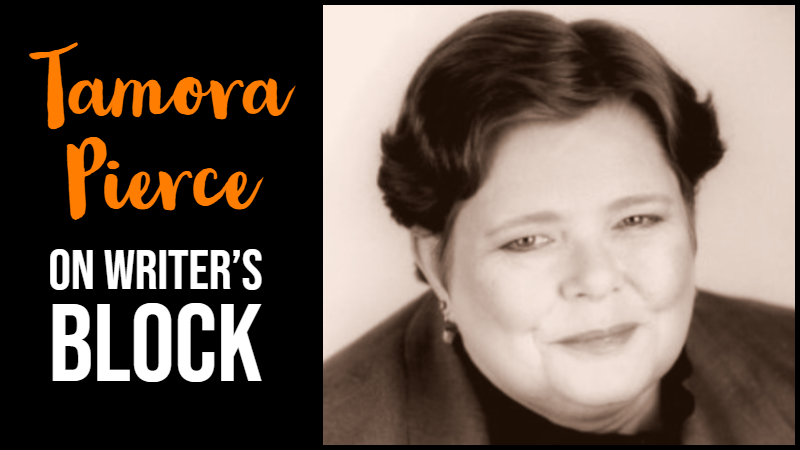 Tamora Pierce On How To Deal With Writer’s Block

Writers Write shares writing tips and resources. In this post, we share advice from novelist, Tamora Pierce on how to deal with writer’s block.

Tamora Pierce, born 13 December 1954, is an American writer of fantasy fiction. She is the #1 New York Times bestselling author of over eighteen novels set in the fantasy realm of Tortall. She is well known for her first book series, The Song of the Lioness, which began with Alanna: The First Adventure

She says she gets her ideas all over the place:

‘Watching his nature programs, I decided British naturalist Sir David Attenborough would make a cool bio-mage: he’s the basis for Numair’s friend and teacher, Lindhall Reed.
Watching my mother and sister produce blankets from balls of yarn and crochet hooks, I thought of it as a kind of magic and wondered what all could be done with thread magic.
Wrestling with my best friend’s dove gave me the ideas for Kel’s relationship with the baby griffin in Squire.
Other ideas come from my past obsessions. As a child, I read anything and everything I could find about knights, the Crusades, and the Middle Ages, before moving on to fantasy novels and Arthurian legends in middle school.’

Pierce won the Margaret A. Edwards Award from the Young Adult Library Services Association (YALSA) in 2013, which recognises one writer and a particular body of work for ‘significant and lasting contribution to young adult literature’.

Tamora Pierce‘s books have been translated into twenty languages. We found this advice on dealing with writer’s block on her website.

Tamora Pierce On How To Deal With Writer’s Block

“Here are some fixes I use when I get stuck:

If you want to write a book, join our Writers Write course in Johannesburg or sign up for our online course.