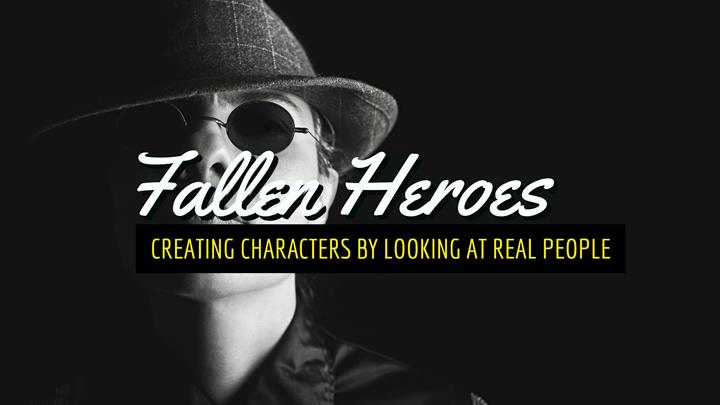 We love creating characters by looking at real people and, in this post, we discuss how writers do it.

Nobody falls harder than a hero. Think of all the heroes who are real people that have let us down. Tiger Woods, Oscar Pistorius, Hansie Cronje, OJ Simpson, Lance Armstrong – the list goes on and on. I am deliberately excluding politicians; a blog post only has so much space.

In this post, I want to look at creating characters by looking at real people.

It made me think about the kind of people they are, bearing in mind, I don’t know them and this is just my perception. They seem to have everything. Their lives seem perfect. They have all worked incredibly hard to reach their goals. They were dedicated. They were heroes. We looked up to them.

Then, in one fell swoop, their castles collapsed. At least, we thought it was one thing, but when the evidence became public, we realised that it was only a matter of time. Tiger was a busy man, Oscar and OJ had a history of violence, Hansie was fixing matches for years and Lance was only the champion of the Tour de Pharmacy.

Focus Mia, this is a writing blog. So yes, to the writing. What do these people have to do with creating characters? Take the series Breaking Bad. The writer, Vince Gilligan, set out to tell a story about a good man doing something deliberately bad, but with good intentions. Then, he turned his protagonist into an antagonist. Brilliantly. Michael Noble highlights the character’s journey in a post called Breaking Bad: when did you lose Walter White?

Now, you don’t have to take it as far as that. Remember your character has a physical goal, and his physical goal will result in emotional change. How will you show me the change? Start with small things. Change his behaviour. Gradually.

Think about what motivated these people in the beginning. They are all sports stars. They didn’t, as far as I know, plan on becoming philanderers, murderers or fraudsters. They were just doing what they loved. When did the one-night stand become a weekly appointment? When did a jealous tiff turn into a murderous rage? I am sure they had their reasons. Little things they told themselves to feel better about what they were doing.

Check out this list of 27 psychological reasons why good people do bad things. It is written about white-collar crime, but I found it very interesting. It’s all about the lies we tell ourselves. How we justify our behaviour. Use it to find a lie for your character.

Primal Fear by William Diehl is another example. I haven’t read the book, which I am sure is better, but what I remember about the movie was my absolute belief in Aaron, the stuttering altar boy accused of murdering the Archbishop. He was brilliantly played by Edward Norton. Spoiler Alert: Richard Gere has to show that Aaron suffers from a personality disorder. He provokes Aaron to change into ‘Roy’ in court. This gets Aaron off on an insanity plea, but what I want you to notice is how Roy was introduced in the story. We get hints and tips as the story progresses that there is more to Aaron than we want to believe. Of course, there is a shock at the end, but I’ll let you enjoy that on your own.

No one falls harder than a hero.

Remember the rule of fiction: Find out what your characters fear losing the most and take it away from them. What did these men fear losing? What was it that compelled them to make the wrong decision? But remember that your characters, like these men, are responsible for their own folly. Don’t blame the whistle blower. Blame the doer. Make them accountable.