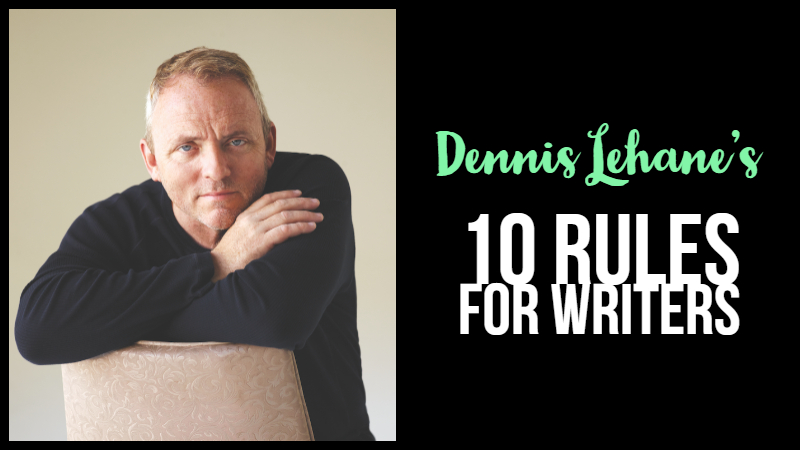 Dennis Lehane, born 4 August 1965, is an American author whose books have been translated into more than 30 languages and have become international bestsellers.

His novels include A Drink Before The War, Gone, Baby, Gone, Shutter Island, and Live by Night. His most recent work is the stand-alone novel, Since We Fell.

Lehane’s gritty noir psycho-thrillers have made a huge impact on contemporary crime writing. His first novel, A Drink Before the War, won the Shamus Award. Four more have been made into successful films, including the Academy-Award winning Mystic River.

Anita Singh, Arts and Entertainment Editor for The Telegraph compiled this list of Dennis Lehane’s 10 Rules For Making It As A Writer

1.  Read whatever you can lay your hands on.

We were working class. There were no books. There were some encyclopaedias – I always say it was the day my father didn’t see the salesman coming. And there was a Bible. I read the Bible from cover to cover when I was a kid. The Bible is an amazing piece of narrative storytelling. Then my mother heard from the nuns – probably the only nice thing a nun ever said about me – that I liked to read. So my mother took me to the library. To this day, I’m a big benefactor of libraries. Without libraries I couldn’t be sitting here.

2.  Write out of necessity.

3.  There’s nothing wrong with a titanic ego.

People I’ve met who have big egos about the work are the people I want to work with. They know why they’re in the room. They’re not insecure, they’re not going home filled with self-loathing and making that everybody else’s problem. The people with the worst egos are people that suck at their jobs.

4.  Know you’re writing something good even if nobody else does.

We knew we were doing something special [on The Wire] even though nobody was watching us. HBO didn’t care. Really, they were just like, ‘If we could find something else to replace you with we would, but we don’t have anything right now so you just do your little Baltimore thing.’ With The Wire, we thought every year we were going to be cancelled. Every single year. We were sure season 4 was going to be our last season, and that’s why it’s the best.

Where I grew up, everybody knew how to italicise. People knew how to hit just the right word in a sentence. I was living in Miami and felt I was losing the voice of Boston. I went back home and ran into a friend of mine. I said, ‘How are you doing?’ and he said, ‘I’m good but actually I got stabbed. And I don’t know what you’ve heard, but getting stabbed can kinda take the fight out of a guy.’ ‘I don’t know what you’ve heard’ – as if you might be under the impression that getting stabbed is like a hot rock massage – and then the gross understatement of ‘it kinda takes the fight out of you’. Not, ‘I was praying to my God’ or ‘My intestines were on fire’.”

My old man slept through all of my three movie adaptations. He slept through Mystic River, got up at the end and said, ‘Oh, your mother said that one was dark.’ He slept through Gone Baby Gone and said, ‘Oh, your mother said you used the f-word too much in that one.’ And then with Shutter Island he said, ‘Your mother didn’t know what the hell to make of that one.’ He never read any of my books and everybody said that was so sad. What my father would have said to that is, ‘Your brother works in a prison but you don’t see me going there.’

7.  Write a scene that breaks your heart.

Dave is to me the hero of Mystic River [the story of a man haunted by childhood abuse]. I worked with victims of child abuse for years and if you get molested, your chances of becoming a child molester go up a ridiculous amount. Dave fights this all the way to the end. He has an attraction to children and he fights it. But I had to do justice to the scene where you see that attraction. It is to this day the hardest thing I’ve ever written. Sixteen hours I worked on the scene and when I finished I closed down my office and didn’t look at it for a week.

I fired my Hollywood agent because I didn’t want to sell Mystic River. But Clint got through my defences. One of the big jokes in Hollywood is, if you answer the phone they’ll say, ‘So-and-so calling for you, will you hold?’ They have an assistant call you to see that you’re there, stupid enough to pick up your own phone. They’re the only people who call you and put you on hold. Clint just calls.

9.  Ignore the critics because what do they know?

[On Martin Scorsese’s adaptation of Shutter Island] I thought he really captured the spirit of it. The book is my least realistic book. It’s a book about books – the Bronte sisters, Mary Shelley, the great neo-Gothicist Patrick McGrath – and 1950s B-movies. And Scorsese got that. He went all the way down the gonzo path on that movie. I knew immediately when I saw it: ‘This is going to p— a lot of people off.’ I thought the New York Times film critic was going to have a heart attack on the page, he was so ballistic about it. But if you know why you do something, then I think you can feel okay with people’s reactions.

10. Never get comfortable with being rich.

Read the full post here: Dennis Lehane’s 10 Rules For Making It As A Writer