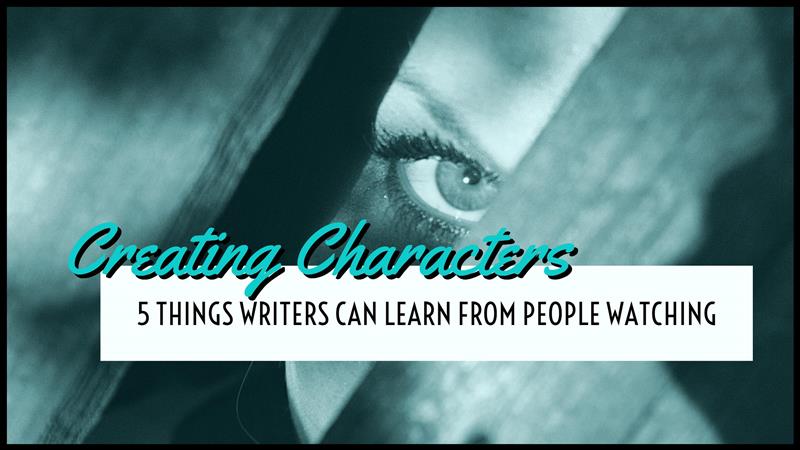 Last night, after watching a movie, my friend I went for a coffee and a quick catch up.

As we chatted, my eye darted around the coffee shop. I realised how much I missed people watching. It’s a bit of a guilty secret. We’re all secret voyeurs but for writers people watching is an occupational hazard.

Your characters don’t come from fresh air. They’re stitched together from real people. Friends, enemies. Lovers, present and past. Family members. People you work with. But strangers are probably the best source – they’re a blank canvas. They help us with description.

Be inspired by real people around you to write really good characters. Watch these five things:

At a table in the far left, a glimpse of a woman. Pale skin, dark eyes. I don’t remember her clothes – but they suggest flow, movement, layers. But her hair stands out for me. Long and silver, tipped with black, the colour is dramatic on a woman so young. In a fantasy story, wouldn’t she be ideal as a beautiful sorceress? She has power, a power that is female, and she doesn’t hide it.

2. The way they are with other people.

At another table, behind the glass partition, a table of girlfriends – maybe five or six of them. They’re animated, young faces clear and open with shared excitement. A waitress moves around the table, collecting orders, like a hand around a clock face. Have you ever noticed that a group of people have a different energy? They’re almost a mini-tribe. What keeps friendships like this together?

3. The way they are when alone.

Half way through coffee, a man sits at the table next to us. Dressed against the cold, he wear a bulky and insular leather jacket. He pages through the menu more than once. Can’t he decide on a drink or meal? Or just passing the time? He has the indifferent loneliness of middle-age. No, I decide loneliness isn’t the right word – he’s not lost or lonely. He just doesn’t mind being on his own.

4. The way they speak and move.

In the middle of the room, two lovers. The archetype. The cliché. But they draw the eye with a sense of wistful envy, a curiosity that leaves a bittersweet smile on my face. They linger over the remnants of their meal; they’re still there when we leave. In his bearded face, his eyes shines. Long legs stretch out under the table, next to hers, with intimate familiarity. She leans in closer, their hands clasped in the middle of the table, a loose vow of fingers. The body language. Love: can you ever write about it enough?

Don’t think I ignore my friend. She agonises over whether she should have cake. ‘Are you having something?’ No, I’m not. OK, she decides she won’t either. She loves tea – tea and all its rituals is part of her personality. Her kitchen tea, before her wedding, was a Mad Hatter’s Tea Party, elaborate and fun. Tonight she echoes my order for a decaffeinated hot drink. I realise she’s not obsessive – but wouldn’t an obsessive love of tea would make a great trait for a character?

Have fun with people watching!

So grab a notebook and pen. Find a coffee shop. A bench at a park. Your seat on the plane. A train. Foyer of a hotel. You get the idea – anywhere where there are people, in fact.

And write down what you see. Ask questions about the people you see. See their potential. Write it down.