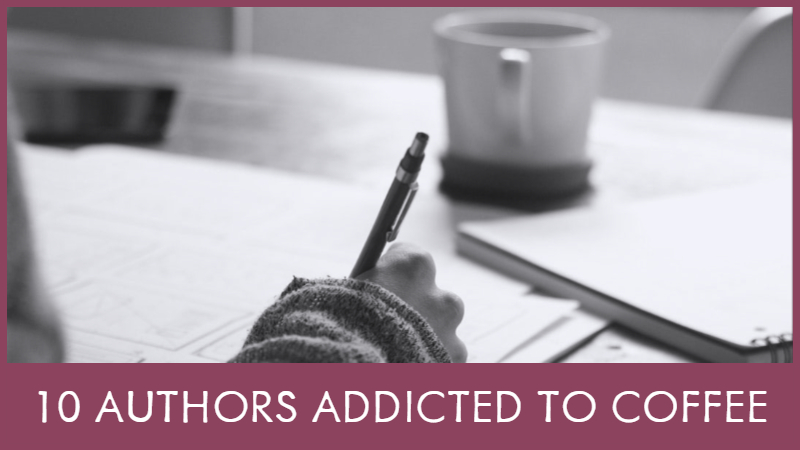 Writers Write is your one-stop resource for writers and this post is about 10 famous authors addicted to coffee.

To celebrate I’ve put together a list of 10 famous authors who are or were addicted to coffee.

‘Were it not for coffee one could not write, which is to say one could not live.’ Balzac used to drink 50 cups of coffee a day. He woke at 1 am each day and wrote for seven hours. At 8 am he napped for 90 minutes, then wrote again from 9:30 to 4 pm. He said: ‘As soon as coffee is in your stomach, there is a general commotion. Ideas begin to move…similes arise, the paper is covered. Coffee is your ally and writing ceases to be a struggle.’

Kierkegaard had an interesting coffee ritual. He poured sugar into a coffee cup until it was piled up above the rim. Next came the incredibly strong, black coffee, which slowly dissolved the white pyramid. Then he gulped the whole thing down in one go. He wrote: ‘At any rate, I prize coffee.’

Voltaire was said to have drunk 30 – 40 cups of coffee (mixed with chocolate) every day. Although he lived to 83, his doctor warned him that his beloved coffee would kill him. He was a regular at the famous cafe Le Procope in Paris and you can still find his desk displayed there. ​

Stein also loved coffee.  She wrote: ‘Coffee gives you time to think. It’s a lot more than just a drink; it’s something happening. Not as in hip, but like an event, a place to be, but not like a location, but like somewhere within yourself. It gives you time, but not actual hours or minutes, but a chance to be, like be yourself, and have a second cup.’

Franklin had high standards for his coffee. He said:  ’Among the numerous luxuries of the table…coffee may be considered as one of the most valuable. It excites cheerfulness without intoxication; and the pleasing flow of spirits which it occasions…is never followed by sadness, languor or debility.’

Pope enjoyed coffee. He said: ‘Coffee, which makes the politician wise, and see through all things with his half-shut eyes.’

Rousseau said:  ’Ah, that is a perfume in which I delight; when they roast coffee near my house, I hasten to open the door to take in all the aroma.’

Barry wrote: ‘It is inhumane, in my opinion, to force people who have a genuine medical need for coffee to wait in line behind people who apparently view it as some kind of recreational activity.’

Goethe was an enthusiastic coffee drinker. Goethe was interested in decaffeinated coffee to reduce his insomnia. His friend, Friedlieb Ferdinand Runge, was able to isolate relatively pure caffeine from coffee beans in 1820.

Swift needed coffee at least once a week to write. He said: ‘The best Maxim I know in this life is, to drink your Coffee when you can, and when you cannot, to be easy without it. While you continue to be splenetic, count upon it I will always preach. Thus much I sympathise with you that I am not cheerful enough to write, for I believe Coffee once a week is necessary to that.’

Visit our online shop for workbooks and courses.