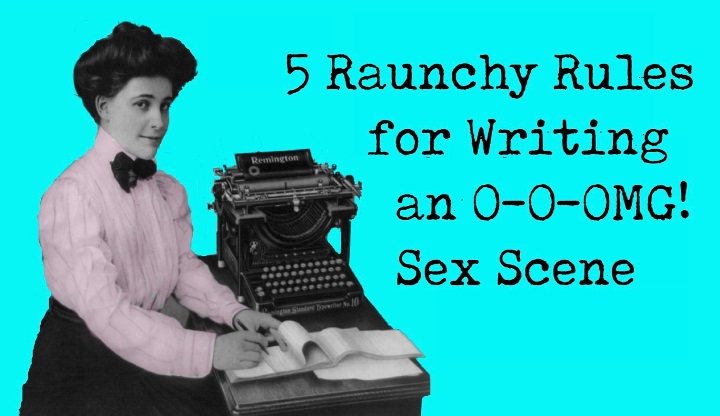 If you need to write a sex scene for your novel, read this post. It has five rules for writing a sex scene.

I was writing a suspense novel when, suddenly, two of my characters were up for it. This put me in an awkward position. Yes! Pun intended. Mention the word ‘sex’ and innuendos stand out like a shag on a rock.

‘Mr Grey dedicates his life to arching his eyebrows, quirking his lips and stroking random objects with his long-fingered hand. Let it be said; there is a lot to recommend a long-fingered hand. This is the world where our hero’s eyes blaze, lips curl and brow furrows. You get the picture. That is, of course, when he is not pre-occupied ‘cocking his head’.’

Now I have to write an O-O-OMG sex scene Like a Virgin for the very first time and I’m channelling Madonna for some reason. I didn’t sign up for this, but the Law of Unintended Consequences had me by the … what? Balls Short ’n Curlies? Bulge? No, definitely not ‘bulge’. A bulge is something Lord Peregrine Payne has in his tight Regency pants in a 1970s romance novel.

Would my words come back to bite – possibly lick or maybe whip – me? Would Lord Payne cock his head and laugh in my face? This was Karma payback time. Would I win a Pull-it-Sir! Prize for bad sex writing?

Friends’ responses to the sex scenes in my recent novel, TARGET 91, included ‘Phew!’, ‘Aww-wwww!’ and exaggerated pirate winks. One psychiatrist friend gasped ‘Ooooo-eee! Racy!’. So, with recommendations including a Freudian Ooooo-ee! and a Pirate Aarrr!, here are my rules for writing a sex scene.

The land of ‘heaving breasts’ and ‘throbbing manhood’ where ‘her portal of womanhood unites with his, um, bulge’ is Vaudeville Land. More nudge-nudge wink-wink than screaming orgasm.

Her breasts were like two … what? Oranges? Ripe peaches? Melons? Fried eggs? Her nipples were erect like two … goal posts? This might be a turn-on but only for a football player.

Here are some lyrics by American singer/songwriter R. Kelly. “I’ll be going ape for ya babe/ All up in your forest going crazy.” This might work in a song, but on paper, it looks ridiculous. Who wants an ape in her bush going crazy? Also avoid your male lover turning into a thrusting lust-fuelled jackhammer or, as in Nicholas Royale’s The Matter of the Heart, “sewing machine”.

There is no shortage of language for male genitalia; pricks and dicks galore. Take your pick but I find pole hilarious. Pole and vaulting are inseparable. Our eager lover leaps onto the bed and then, in my imagination, vaults over it onto the floor. Ditto rod. It’s a fishing term. Staff is too close to flagstaff. You know where the flag is attached. The mind boggles or flutters.

Naming ‘lady parts’ is a minefield, a moist, bushy and possibly slippery minefield. Vagina and labia are too gynaecological. Vulva sounds like Volvo. Even if she is revved up all I see is smoke. Pussy is a no go for women. Too often pussy is used in dismissive man-speak. ‘Did you get your piece of pussy?’ Use your female-positive imagination.

But the truth about any sex scene is that it depends on the individual characters involved and, if they are strong characters, then they call all the shots. The words used are their words. The author is, alas, just a tragic voyeur. by Kerry Cue. Kerry is an author, humourist, journalist, and mathematician. Her latest book, Target 91, a suspense novel about American gun culture, was published by Penmore Press, Tucson, AZ in 2019. Follow her on Twitter: @PoliceBizz and Facebook: Kerry Cue Author