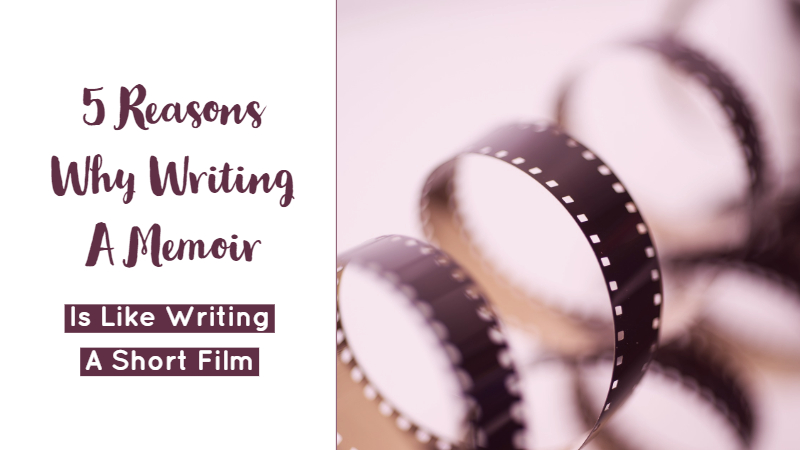 In this post, we suggest five reasons why writing a memoir is like writing a short film.

I was reading a post by Sean Leonard on How to Write a Short Film. It struck me as I was reading that writing a short film is quite similar to writing a memoir.

He says that short films are about the most important moments in a character’s life and that they are concept-driven, rather than plot-driven. As with all films, they are a visual medium with a beginning, middle, and ending. There also doesn’t have to be a twist.

I have used Sean’s points to explain why writing a memoir is similar and expanded on them.

1. Memoirs are about the important moments

A memoir is not an autobiography. It is about a series of events in a person’s life that are linked by a theme.

The Academy of Motion Picture Arts and Sciences defines a short film as “an original motion picture that has a running time of 40 minutes or less, including all credits”. A memoir is often shorter than a novel. It is usually around 50-60 000 words, while novels are around 80 000 words.

2. We see memoirs through the eyes of the narrator

Short films are delivered in an interesting way from a specific, dynamic perspective. Leonard says: ‘Make sure you are delivering a story that uses visuals in an important/interesting/dynamic way.’

Memoirs, if they are any good, stamp the narrator’s viewpoint firmly on the story. Good memoirists do this by employing all the senses, and readers often feel as if they are watching a film of the writer’s life.

3. There is a timeline, with a beginning, middle and ending

Using a timeline can help you locate and isolate the time you want to write about. This gives you the framework for a beginning, middle and ending. Like a short film, you can use this concentrated period to show your story and how you have changed. You can also show how the world has changed.

Leonard writes: ‘Set up and resolve dramatic questions. If a story feels unfinished, the emotional impact will be diffused, and the third act will be anticlimactic.’

As a memoirist, you need to leave your audience feeling satisfied that you have resolved something. This does not mean ‘happily ever after’. It means that you have grown and learnt something along the way. It is the reader’s payoff for reading the memoir.

4. Memoirs are concept or theme-driven

The best memoirs are the ones that help you discover a truth about the human condition. This is usually shown through a theme. A theme should never be stated but should be developed through character changes.

Leonard says: ‘We quickly understand concepts. That’s the whole point. Concepts are general ideas. The virtues of a plot aren’t always so readily apparent. Strong stories that work quickly are great for short films, but concepts are even better.”

A theme is similar to a concept because it is an idea. It is better if you can describe it as a full statement, with a subject and a verb. It sums up what the story shows us about being human. It is not a moral.

You definitely do not need a twist or a surprise because you are not writing fiction. Even if what happens to you is surprising it should not be written as a plot twist. Remember that you are supposed to be telling your truth – your story.

Leonard says: ‘If a twist ending is dragging you into bad habits, then avoid the twist ending.’

Top Tip: If you want to learn how to write a memoir, look into our Secrets of a Memoirist course.