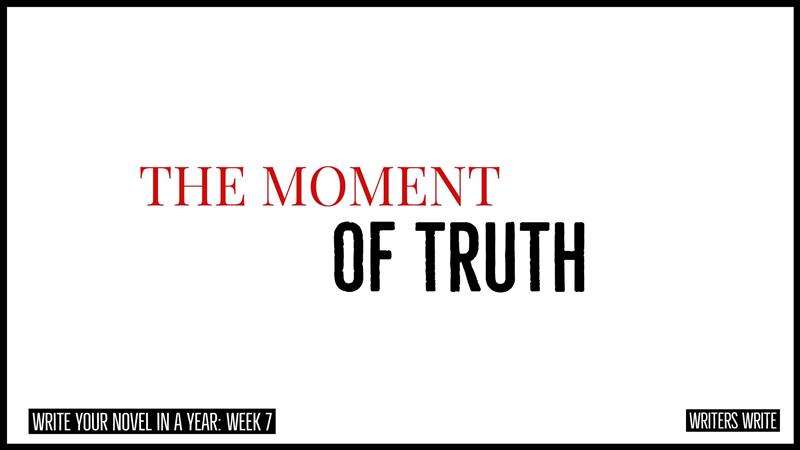 Write Your Novel In A Year – Week 7: The Moment Of Truth

This post is about developing your story from the inciting moment through the midpoint to the moment of truth for your main character.

Welcome to week 7 of Anthony Ehlers’s series that aims to help you write a novel in a year. Read last week’s post here.

The thread of truth

Earlier on your working synopsis, in beginning section, you probably identified your inciting moment — the moment that your main character brushes up against the thing that will eventually change their life in a dramatic way and he or she is called to action.

Near the end of your synopsis, you now need to find the moment of truth — the moment when your character learns or experiences something that will that will do one of two things. One, it will bring them to their knees and they will feel defeated. Two, it will empower them to move forward to their goal even more forcefully.  Either way, this decision will lead you and the character to the climax of the story.

These two moments are pivots in a novel. Your character has to make a decision — rationally or irrationally — that changes the course of the story.  Having said that, they must tie up together.

In a romance, the first is when the two lovers meet; the second is when they declare their love for each other. In a family drama, the two could be connected around family rituals — getting engaged/the big wedding, falling pregnant/having the baby, or a loved one getting sick/death of the loved one.

In my novel, the inciting moment is when Matt and Jenna invite Monty, the younger man, into their bedroom and their lives. What’s the moment of truth?  In a thriller, it would be the moment we reveal if their relationship survives – even if there is an emotional cost to its survival. It could almost mean the end of the relationship – even if there is an emotional freedom to its demise. And there it is — the pivot.

As you work on your synopsis this week, developing it from the midpoint to this moment of truth, keep a few things in mind.  If your character appears to be losing in the middle — if this is the lowest point in their lives — then they should ideally triumph at the end. If your character appears to be winning in the middle— if they seem to be reaching their goal — then the end should probably cheat them of this goal.

These aren’t inviolable rules, but they’re worth exploring. One thing is certain though. From the midpoint to the moment of truth, you have to start raising the stakes. And that means — you guessed it — more conflict.

Turn up the heat …

In Lisa Scottoline’s page-turning legal thriller, Dirty Blonde, her main character, a federal judge called Cate Fante, is faced with major conflict in the middle of the story. It’s when her world implodes, and her private life and secrets are laid bare to everyone. Scottoline raises the conflict like someone turning the thermostat up with cruel relish— making things very hot and uncomfortable for Cate. (In fact, she even puts Cate in a setting that looks and feels like hell on earth.)

How does she do it? Cate’s role as a judge is in jeopardy. She’s lost her boyfriend. Her best friend and her autistic child are at risk. There’s a madman, bent on revenge, looking to kill her. It doesn’t get more intense than this. I think you can guess from how bad things are in the middle how it all ends.

However, in a moment of truth, she learns something about her past and the mother she never really understood — and, more important, about herself — and this gives her the courage to fight on to the end.

In my novel, I realised that there wasn’t enough conflict. I had to look at what could be taken away from Jenna and Matt. It wasn’t enough that they were in jeopardy — but their actions had to have consequences for their families, their careers, and so on. It is a challenge, but ask yourself: What does my main character have to lose? And is it worth fighting for? Really worth fighting for?

The bestie — what’s her role?

One character you can focus on this week is the support character for your lead. This character is often overlooked but it is a great character to explore. Why? Instead of being inside your main character’s head to understand her intimate thoughts and feelings, she can express these to her confidant. (What would Sherlock Holmes be without Dr Watson?)

At first, I struggled with this role. Who would be Jenna’s friend? I didn’t want to develop a cliché of two cappuccino-sipping friends in a coffee shop gabbing about ‘man problems’ or a ‘bad day at the office’. Instead, I decided that the jazz singer Jenna is photographing would, inadvertently and unexpectedly, become her confidante.

This would give me the opportunity to show two very different women finding an unlikely friendship. The older singer would give the younger photographer advice in a way that wasn’t blatant but would almost be subtext to the main storyline. Who plays this role in your novel?

Pin it, quote it,believe it:

‘Don’t just make love, make anguish for your characters. Don’t satisfy your hero’s desires, thwart them. Make them earn the happy ending they want. Even better, make them deserve it.’ — Damon Suede

Don’t miss next week’s instalment of Write Your Novel In A Year! Week 8: Untying The Knots