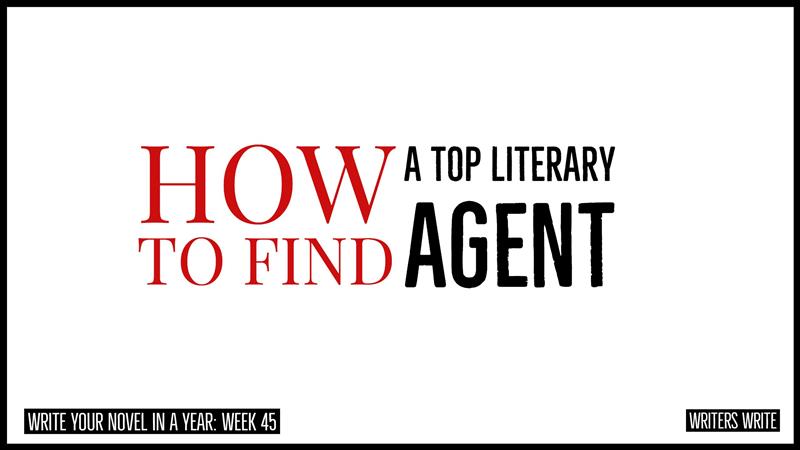 Writers Write creates and shares resources for writers. In this post, we offer suggestions on how to find a top literary agent.

Welcome to week 45 of Anthony’s series that aims to help you write a novel in a year. Read last week’s post here.

‘A good literary agent is a career builder, rather than just a deal maker,’ says Mark Gottlieb, of the Trident Media Group, a New York literary agency, which represents over 1,000 bestselling authors. ‘A good agent isn’t only booking talent, but creating opportunities for the writer — with a battle plan that’s ready to shock a publisher and impress an author.’

Mark has ranked as high as #1 in Agents on Publishersmarketplace.com in Overall Deals and other individual categories. We asked him about finding an agent. 1.  What do you look for – and avoid – in manuscripts in your role at Trident?

When writing commercial fiction, it’s important to be aware of genre conventions and tropes — either to avoid them or spin them in a new way. For example, in almost every zombie novel, the protagonist wakes up in hospital from a coma to find the world’s full of zombies. Nowadays, that trope is just old hat to most readers.

The notion isn’t entirely true. I’ll give an example. A recent manuscript I took on, and sold, was sci-fi author Christopher Brown’s Tropic of Kansas coming out from Harper Voyager in 2017. What drew me to the project was that Christopher not only had a lot of ‘street cred’ as an award-nominated writer in his shorter work — stories, nonfiction, and criticism — he’d already collected pre-publication blurbs from notable authors for his book and trade review sites.

My advice is to really nail the writing of that query letter. A good query letter that reads well is usually a good indication that the manuscript will similarly read well, inclining the agent to request the manuscript. Often the query letter can go on to become the publisher’s jacket copy.

4.  What value does an agent deliver in return for a percentage of an author’s earnings?

At the Trident Media Group literary agency, we’re a full-service literary agency. Many of our fiction and non-fiction titles have appeared on the New York Times BestSellers Lists and have won major awards, including the Pulitzer Prize and the Booker Prize.

The value for authors lies in what I call the ‘Trident Advantage’. We’re a diverse group of successful literary agents, skilled in all genres of fiction and nonfiction, and career management. We’re leaders in international sales, audio rights, film and TV sales, and foreign rights. We offer support services, which include contract negotiation, legal review, and much more.

5.  Can an independent or self-published author get an agent?

The bar is quite high in terms of self-publishing to attract an agent or traditional publisher. An author needs to have sold at least 50,000 copies at a decent price to secure an agent.

It’s easy for an author to feel discouraged and turn to self-publishing or small indie publishing. However, many successful self-published authors eventually go into traditional publishing to take advantage of having a team of professionals at a literary agency who help them take their work to the next level.

At Trident, we’ve built a lot of self-published success stories into bestsellers, giving authors a Godzilla-like footprint in the industry.

I’d like to think that a literary agency would save an author a lot of headaches in order to help them focus on their own writing, allowing them to be more prolific.

6.  How has agenting changed in the era of digital publishing?

The digital landscape has seen our literary agency evolve. Our agency, for example, has a digital media and publishing department, focusing on digital marketing and a publicity strategy for our authors.

Many of our authors have benefited from this service, going on to hit the bestseller lists. As such, we have tremendous resources available to help our authors, especially working with their publishers. We have in-depth meetings with publishers, and encourage them to perform more marketing tasks for the author.

It’s no lie that an author receives a larger share of royalties in the digital space in self-publishing. However, authors sell in smaller numbers than a literary agent and publisher could do for an author.

7.  Does one have to have a completed manuscript before approaching an agent?

Generally, fiction needs to be fully written in order to be sold, since it’s about the quality of the writing. An agent would be reluctant to sell a work of fiction on a proposal basis. Non-fiction can be sold on a book proposal, as it’s idea driven and more about the author’s authority on the subject matter.

8.  How long does an author wait to hear back from an agent?

Depending on the length of a manuscript, and how much is on the agent’s plate already, response times can differ. I prefer to read a submission within the first few days or weeks of receiving a manuscript from an author in order to express my level of enthusiasm rather
than just sitting on my hands.

9.  Should an author submit multiple queries to multiple agents?

I always say begin at the top in terms of submitting to literary agents, and then work your way down — that will produce the very best results.

Most literary agencies tend to be small and are inclined to give rights away to publishers. This is because they can’t fend the publisher off, or just don’t have the resources to sell those rights properly on their own.

Trident has nearly 50 full-time employees, and handles contract review, foreign rights, audio books, film and TV, within our own company walls. We help authors properly exploit those rights with other publishers.

Unfortunately, the world of literary agenting is full of a lot of people who appear to have died on the inside and are just waiting for a bestseller to hopefully float on down the river.

I don’t see the need for a literary advisory service in an author’s life once an author finds a proper literary agent. Explore: Anthony Ehlers, Publishing, Write Your Novel In A Year