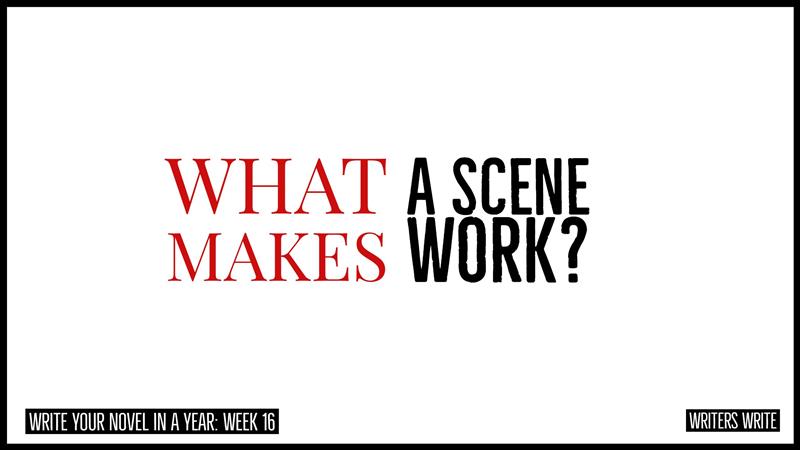 Writers Write is a comprehensive writing resource. In this post, we look at what makes a scene work in a novel.

Welcome to week 15 of Anthony’s series that aims to help you write a novel in a year. Read last week’s post here.

[The 52 posts in the series are also available in a downloadable, advert-free workbook. Click here to buy it: Write Your Novel In A Year Workbook]

We now know that we need scenes in our books, but what makes some work better than others?

What Makes A Scene Work In A Novel?

Just last weekend, I found a copy of my favourite novel, Paris Trout by Pete Dexter, in a second hand bookstore. I can’t tell you how many times I’ve read this book – but it’s a lot. I always loan it out to friends or writers – but it always pops up in out-of-the-way books stores with a different cover. It always comes back to me. And every time it comes back to me, I read it again.  Each scene in the novel is as perfect as a short story in of itself.

This got me thinking about what makes a scene in a book work and how can we try this in our own novels this year.

What I’ve learned from this book is that a scene doesn’t have to be flashy or overly dramatic – you don’t need to put your adverbs on steroids to make it exciting. Dexter lets the story unfold in finely crafted scenes, each written with a quietness that makes the plot more disquieting and disturbing than if he was writing in an ostentatious style. There are no pretensions here; each scene has a gravity that holds you as a reader. He stays low and keeps you connected to the truth of the story.

The first thing is to know your character so well that everything he says and does on the page seems so credible that the reader will have no other choice but to believe he is real. In Paris Trout, for example, we have a character who won’t go into his own garden in the morning without shaving and combing his hair.

In my novel, I realised that I don’t really know my characters that well, especially my antagonist. And, just as in life, if you don’t know someone well enough, you’re scared to approach them – you become wary of them, you keep them at a distance. That won’t do as a writer.

How to fix this? I think you have to make peace with being uncomfortable with how your characters behave. It’s not up to you to judge your characters – that’s up to the reader. Your job is to record their actions as honestly as possible.

In each scene, you need to find the truth of that scene: the thing that’s going to stay with your character and the reader and you, as the author. It’s backing your characters into a corner – that dark, inescapable place – where they’re ‘trapped’ by the truth.

You can do it as part of the narrative. In Paris Trout, for example, the abused wife of the antagonist has a moment of insight in a coffee shop: ‘She saw it clearer now, the size of her mistake, marrying Paris. It was the same mistake she’d made when she left Cotton Point for the job with the State. Wanting what she did not have.’

And you can do it in dialogue. For example, in my novel, my main character, Jenna, says to her boyfriend, Matt, ‘I always thought I didn’t know you – but it turns out I didn’t know me.’

Most of us don’t have a neat dictionary for our emotions — and neither do our characters. This is the part of writing that gets hard, that forces us to look at our own emotions and stalk our demons.

In Paris Trout, Dexter illuminates key scenes in his book with a visual that haunts the imagination long after you’ve read it. For example, he describes a young black girl lying in a hospital bed: ‘The pillow rose up around her face and softened it, she looked like some dark-centred flower.’ In that one sentence, he shows the character’s vulnerability, her innocence, in a powerful way.

Finding the moments that ‘glow’ on the page isn’t easy, but it starts with forgetting about the words, letting go of the perfect sentence, and just ‘seeing’ what’s behind your eyes.

Before you start writing your scene, just list everything you see. Start with the big things – like ceiling in an office that looks like a blank chessboard for those who’ve lost their imagination – and then go to the smallest detail – like the bruise under a character’s thumbnail that looks like a trapped tick.  Of course, you don’t have to use all of them in your scene — just the ones that stay with you, that add weight to the scene, and that make the scene more interesting.

Write for a half hour or one hour every weekday on your scenes.

‘The best lines that you write, at least sometimes, are the truest lines, and they’ll sometimes startle you when they come out. And to get to that place, where things are really true, is often uncomfortable. ’ — Pete Dexter