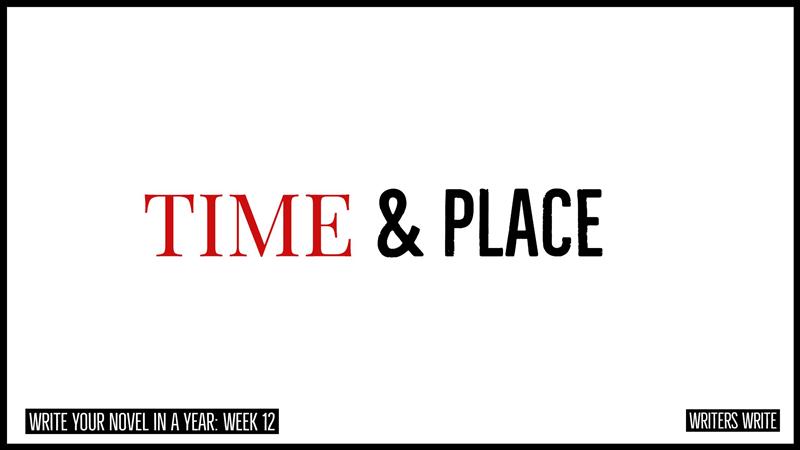 Writers Write creates writing resources. This post is about the role of time and place in your novels.

Welcome to week 12 of Anthony Ehlers’s series that aims to help you write a novel in a year. Read last week’s post here.

This week, as we start to wrap up the planning of our scenes, let us think about the role of time and place in our novels.

Over what period of time does your story take place? Some sagas or historical novels can take place over decades or even centuries. Edward Rutherford’s novel, London, charts a story from 54 B.C.E to 1997. On the other end of the spectrum, a novel’s events can take place in a single day, like Saturday by Ian McEwan. Other novels, however, play with time and braid together the past and the present. In Patrick Gale’s Rough Music, the narrative tells of childhood and adulthood in alternating chapters.

However, most novels will follow linear or chronological time. It’s a good idea to draw a timeline for your novel. Take a blank piece of paper and turn it landscape. On the far left end, write the date, season, or year your story starts — on the far right end, write when it finishes. In between, you can create ‘markers’ for the major events that happen during the course of the story.

In my novel, I wanted a constrained period of time. In a thriller, you want things to happen quickly — and be over quickly too. I felt it should take place over just a few weeks, no more than a month and a half.

‘It’s no use going back to yesterday, I was a different person then,’ goes the famous quote from Alice in Wonderland.

Just as people change, so do places. Just recently, I drove down a street I hadn’t been down in years and was surprised by how much had changed. But even if the places stay more or less the same, our relationship to these places almost always changes.  Places are more than bricks and mortar: they’re about smells, tastes, sounds, emotion.

In my novel, the beach house is just such a place for Jenna. It used to be her mother’s house and so she has all these nostalgic childhood memories of sea, family, love. It’s also the place where she and Matt, her boyfriend, go on weekends to escape the city. They’ve made their own memories of late morning breakfasts, surfing, walking on the beach, and laughing. When there is a break-in at the beach house, she feels her memories have been violated. Her place of refuge suddenly feels unsafe.

Give some thought to the history of places in your book. Places are containers of memories, a place for memories to be made — there’s always a personal attachment to them, even if it’s hate or indifference.

I recently read a novel written, and set, in the early 1970s. The descriptions of hippie culture in San Francisco and the magazine industry in New York added great colour to the story.

What struck me is how naturally the characters were reflective of the time they lived in. The sexual revolution was in full swing — with just enough promiscuity and ‘free love’ to add some titillation. No one worried about AIDS, in fact they had a cavalier attitude to sex in general. Pregnant women drank champagne and smoked. (In fact, everyone smoked — even on aeroplanes.)

The story was of a time and a place and, most important, of a type of character that could only exist in that time and that place.

To be honest, I’m not sure of the answer to that one. What I do know, or sense at least, is that relationships are being defined and even redefined in the world around us today — and perhaps that was something my book could reflect.

‘It’s that commitment to place on the part of the writer that elevates what might be an ordinary scene in an ordinary place and makes it unforgettable.’ — Elizabeth George

Explore: Anthony Ehlers, Setting, Write Your Novel In A Year