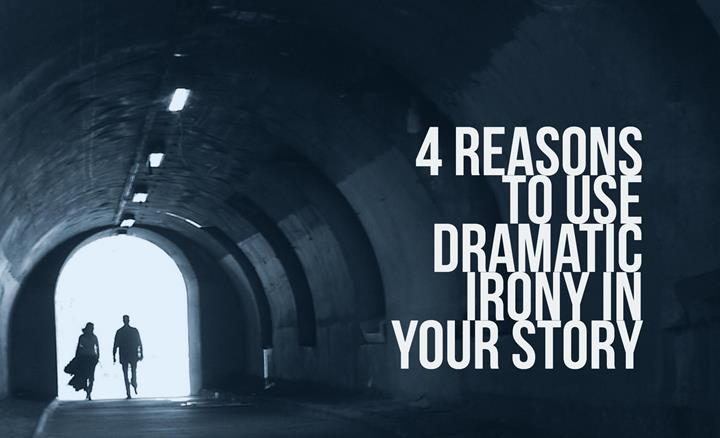 Writers Write is a resource for writers. In this post, we include 4 reasons to use dramatic irony in your story.

Dramatic Irony – What is it?

Dramatic irony is a storytelling device. It is when you give your reader plot information that the main character does not have until later on in the story. Sometimes you want to keep all of your characters in the dark about a major plot point that will only be revealed in the climax.

When using dramatic irony, it should tie in with your theme. The characters must make a statement in the story, through dialogue or action, which throws the absurdity, danger, or emotion of the scene into relief. The dialogue will usually have a changed or opposite meaning. Similarly, the action will be misconstrued in some way, or cause a complication.

4 Reasons To Use Dramatic Irony In Your Story

Here are the four reasons why you would use dramatic irony in a story, together with four examples, and their ironic statements.

Phillipa is young detective is hunting down a serial killer targeting women. She works with her older partner, Rob. She sees him as a trusted mentor. As the story unfolds, we explore the killer’s viewpoint – and realise Rob is the killer. Eventually they arrest a schizophrenic vagrant and she thinks the case is closed. When she finds video surveillance that puts the vagrant in another location at the time of one of the killings, the first person she turns to is Rob and goes to his house, alone. Ironic Statement: ‘I came to you because you’re the only one who will know what to do,’ Phillipa says to Rob. Of course he will know what to do – kill her.

A jealous fiancée, Dani sees her boyfriend, Kyle, sitting cosily with a beautiful blonde in the very coffee shop where they met. Suspicious, she checks his iPad and finds online bookings for a romantic break for two. Meanwhile, when we are in Kyle’s viewpoint, we know the blonde is a wedding planner and he is putting together a romantic honeymoon. They eventually break up because of her misunderstanding. Ironic statement: ‘Don’t think I don’t know what you’re up to,’ an angry Dani says to a confused Kyle.

Gretchen, a widow living in a retirement village, believes her dead husband is sending her messages from beyond the grave when she finds her favourite roses on his grave. However, we know that Klaus, another resident in the village, has been putting the flowers there—he heard her tell the nurse they were her favourite gift from her husband. He forms a friendship with Gretchen but she will only love her lost husband. Ironic statement: After she dies, Klaus brings white roses to her grave in the final scene.

The only job Denise, a qualified but disgraced lawyer, can get is as a cleaner at a law firm. David, a new lawyer, is struggling to settle a case. At night, Denise arranges his books or files with Post-Its that point him in the right direction. As David starts to solve the case, he becomes more confident. Ironic statement: When he discovers her in his office, David thinks she is stealing and has Denise fired—just before she was about to give him the final piece of the puzzle.

Of course, irony is one of those prickly topics in literature and we’ll never get our arms fully around it. The idea is not to have an academic debate about what is and what isn’t irony—but to find plot techniques that will make your story stronger.

Four Top Tips to Get the Reader’s Buy-In

Find the perverse logic in your character’s dilemma, or create a plot idea that can be turned on its head and you’re halfway there. Give us something that will make the reader take on the emotions of the character – whether it is to cringe or cry, bite their nails, or bellow at the page: ‘Don’t go into the basement!’