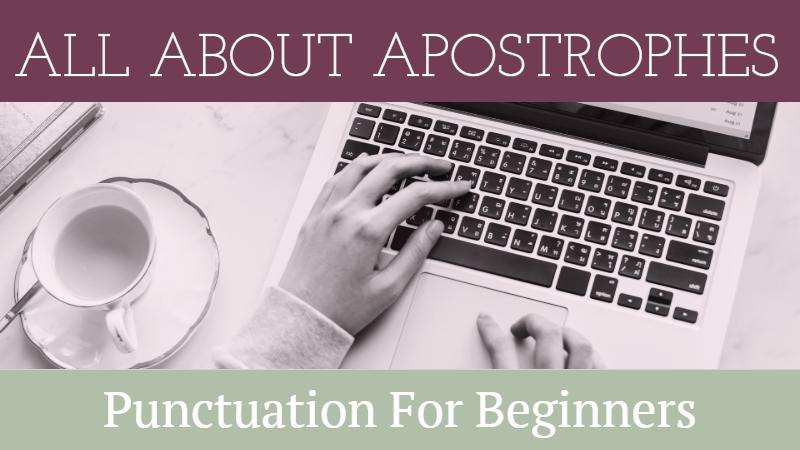 Continuing our series on punctuation for beginners, this post is all about apostrophes.

Welcome to the eleventh post in the series: Punctuation For Beginners. We’ve discussed what punctuation is and why we need it.

These are the most common punctuation marks:

(Sign up for our newsletter to get our Daily Writing Links, and you won’t miss out on any of our posts.)

Today, I will be writing about The Apostrophe.

An apostrophe is a punctuation mark (‘) that is used to indicate either possession (Sam’s car; girls’ hats) or the omission of letters or numbers (won’t; she’s; 22 Feb. ’89).

1. Use Apostrophes To Indicate Possession

Use an apostrophe to show that a thing or person belongs or relates to someone or something.

Example: Instead of saying ‘the storm of yesterday’, we can write ‘yesterday’s storm’.

How to use the possessive apostrophe:

Note: We do not need an apostrophe with the possessive pronouns: his, hers, ours, yours, theirs (meaning ‘belonging to him, her, us, you, or them’).

2. Use Apostrophes To Indicate Omission

An apostrophe can be used to show that letters or numbers have been omitted. These are also known as contractions.

Contractions are considered informal, and should not be used in official business documents, contracts, theses and dissertations, formal letters, CVs, forms or applications.

However, you should use contractions in fiction and in most copywriting.

Commonly Confused: It’s Or Its?

its (without an apostrophe) means ‘belonging to it’

The general rule is that we should not use an apostrophe to form the plurals of nouns, abbreviations, or dates made up of numbers: just add s (or -es, if the noun in question forms its plural with ‘es’).

It’s important to remember this rule. An apostrophe should never be used to form the plural of ordinary nouns, names, abbreviations, or numerical dates.

These are the only cases in which it is considered acceptable to use an apostrophe to form plurals.

Use this infographic to help you with apostrophes: The Ultimate Apostrophe Flowchart For Writers

Learn how to write for business. Join us for The Plain Language Programme