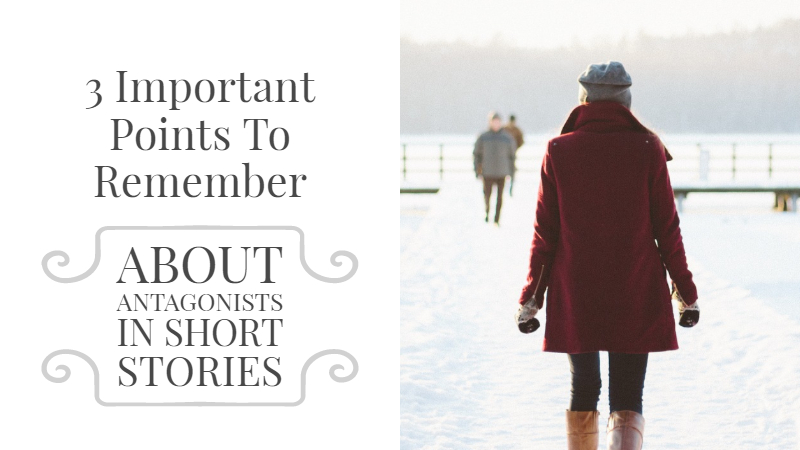 In this post, we cover three points to remember when creating antagonists in short stories.

Something has happened to your protagonist and they now have a goal. Once your character has decided on a course of action, he can’t simply skip along and achieve his goal without some problems. We need conflict in fiction.

What is the difference between the antagonist and the conflict? We need to differentiate between WHO and WHAT is stopping our character.

WHAT is stopping your character?

Conflict can be anything that makes it hard for your character to achieve his goal. Traffic, the weather or even zombies. We get two kinds of conflict: Inner and outer.

(Why are you still watching The Walking Dead? Not because of the zombies, right? You could replace zombies with lack of oxygen, tsunamis or even a mass of murderous droids. You are interested and invested in the relationships and the characters and their will to survive.)

Conflict can also come from the characters themselves. This is the inner conflict. We are our own worst enemy and all that. Mental conflict, self-doubt and our own demons make for great conflict.

I’ll talk more about inner and outer conflict in a later post, today I want to focus on the opposition.

Outer conflict usually comes in the form of a character.

Think about Luke and Vader, or Harry and Voldemort, or Katniss and President Snow.

WHO is stopping your character?

That is the antagonist, the person who opposes your character’s goal. Go back to your story goal and figure out who is the character who most opposes your protagonist.

Keep these things in mind:

For an 80 000-word novel, I would suggest finding a person to fight. An actual, real person to punch in the last scene. (If that is the kind of story you are writing, they can also bitch-slap, fling tea or challenge one another to a duel at high-noon.) Try to put your protagonist and antagonist in physical contact.

In a short story, you will be able to get away with things you won’t in a full-length novel. In a short story, you can spend 2500 words arguing with yourself, if you are good enough. For a whole novel, you have to be exceptional, but most short stories involve, one scene/scenario, more than one character, and those characters are in conflict with one another. Go for that.

This goal, the conflict, both inner and outer, and the resulting journey will cause the character to change emotionally and physically.

And then I still expect you to have fun while doing this. No pressure.

Top Tip: If you want to learn how to write a short story, sign up for our online course.