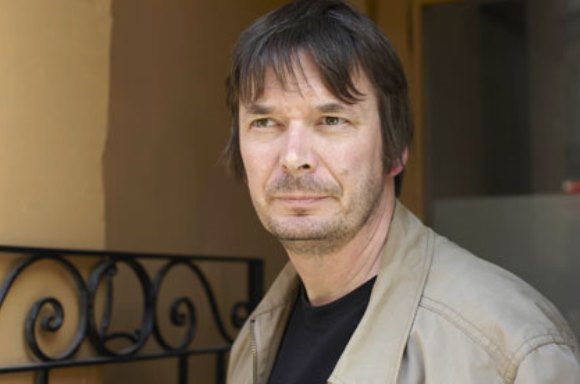 Ian Rankin was the first author I ever interviewed. It was 2004 and I had the UK’s best-selling crime writer all to myself before he spoke to a packed hall of guests from Writers Write. And yes, he’s one of my heroes. His novel, Black & Blue sits on my all time favourite book list. It refuses to budge from my Top 26, while others fall off it as time goes by.

The venue was Crawford College in Benmore Gardens and we needed somewhere to speak. We walked into the plush principal’s office most people would be happy to call a living room.

We may as well still have been in Scotland. Crawford College is Scottish-themed down to its tartan toes, which must be a surreal experience for a Scotsman who had just arrived in South Africa.

We settled down and I started. I was nervous, so the first thing I said was: “I’ve never interviewed anyone before.”

Relief! I had been so afraid that my hero would be affected and awful, but he wasn’t. He was great – just a regular guy who manages to sell 750 000 books in a first printing, who somehow happens to have moved into a ‘posh’ street in Edinburgh, which just happens to be the same one that J.K. Rowling and Alexander McCall Smith live on. Imagine their dinner parties!

But it wasn’t always champagne living for Ian. He grew up in the coal-mining town of Cardenden in the Kingdom of Fife.

“Which was the first book that made you believe you wanted to be a writer?” I asked.

“One of Enid Blyton’s stories of pixies and their amazing adventures. Can’t remember the name of the book, though,” he answered with a smile.

But Clockwork Orange was important for him. He read it when he was 13 or 14 and it was the first classic that he enjoyed and identified with. That and all the comics he drew. “The only problem with that was that the words improved but the stick men stayed stick-like. I thought I’d stick to writing then.”

His parents thought he should choose a profession like accountancy–something useful–but he went on to read English at University where he joined the obligatory punk band. For the first time he met people who had the same dreams and passions as he did. There were poetry, writing and reading clubs and people who aspired to become authors. He was given a grant to complete a three-year thesis, but never did it.

He gave himself three years to write three books instead. “And then it all happened?” I asked.

“Not a chance,” he replied. His overnight success only took about 15 years or so. His wife, Miranda, worked while he wrote.

A publisher in Scotland took on his first novel, The Flood. 200 copies were printed. The Watchman came and went. Ian wrote under a pseudonym – Jack Harvey to make enough money to pursue his dream to write full time.

He lived in France for six years before Knots & Crosses arrived in print, D.I. John Rebus in tow. “No big deal.” Then, the breakthrough came. Black & Blue was set to be his last novel for his publishers. They weren’t sure they would renew his contract.

“I got the story for that one from a man in a pub. About this guy on an oil rig. He was strapped into a chair and a plastic bag taped around his neck. No motive. No suspects. He lived. But I used artistic license in the story. My victim wasn’t that lucky.”

“He was real too. Never been caught.” And so Ian invented the story where Rebus hunts down Bible Johnny.

It’s one of the most disturbing books I’ve ever read. “I found it terrifying in its ordinariness,” I said.

“I’ll take that,” he replied graciously, as I wished I could rewind 30 seconds. There’s nothing ordinary about the book. It’s a gripping read, but he seemed to get it.

John Rebus has given Ian Rankin the voice he needed to show the world what the underbelly of Scotland is all about. Edinburgh will never be the same for anyone who reads the Rebus series. The publishers kept him on and now there’s a Rebus Walking Tour in Edinburgh, an official fan club, and he has an official website.

We says he envies writers who have the time to write instead of going on all of the promotional tours he does. He can only write in his home at his PC. He likes to write between 9 a.m. and 3 p.m. Sometimes he’ll also do a stint from 9 p.m. to 10 p.m. or 1 a.m. to 2 a.m.

He handles all his own mail. No secretaries or assistants.

He says his next book is called Fleshmarket Close and will be out in September. He brought the 14 pages of editor’s notes for the final draft of the novel to South Africa. “What makes your writing successful?” I asked.

“Luck. Being in the right place at the right time and that sort of thing. Persistence.  A good agent.”

“You have to have a story that’s worth telling,” he said.

And then I shut up. Partly because it was time to start the author talk, but also because he was absolutely right. Most of us forget that little thing. That story that’s worth telling. If you enjoyed the post, you may want to read: Ian Rankin’s 10 Rules For Writing Fiction