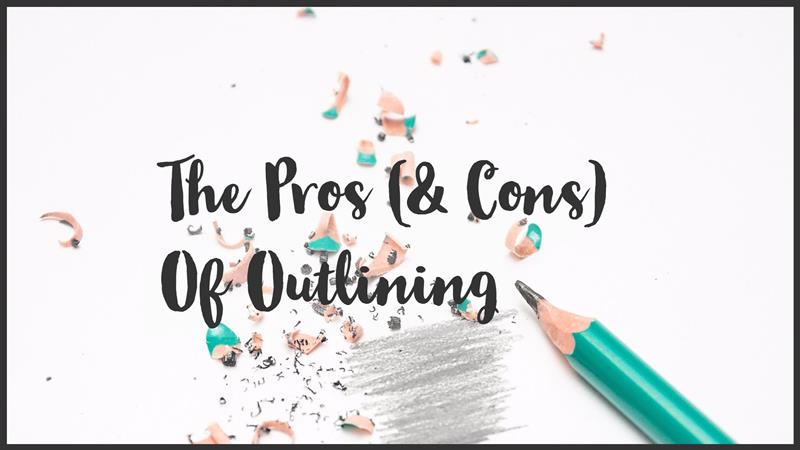 The Pros (& Cons) Of Outlining

Storytelling is a craft.

Much of the craft has to do with the structure of the story, the construction of its narrative. The process of planning how the story works is known as outlining.

Outlining with index cards that stand for plot events is a popular way of shaping story structure and determining the dramaturgy. Many authors devise their plot and characters first, before filling the first page with text.

The difference between outlining and writing has led to the idea of plotters versus pantsers. Plotters map out the story before setting pen to paper. Pantsers write “by the seat of their pants”, making it up as they go.

The distinction is probably spurious.

Some plotters may find that their plots veer off the course they had planned in the outline. Some pantsers may actually have a much clearer outline in their heads than they care to admit, and just refrain from setting it down on cards first.

What is outlining – really?

Outlining the plot is organising the events into a narrative. Say you have an idea for a certain plot event. Even if you don’t yet know how it fits into the overall scheme of the story, save it on a card and pin that to the wall.

You may, for example, have a vision of a man in a suit standing alone in a vast flat expanse of cornfields, and he is attacked by an initially harmless seeming crop-dusting plane. Capture the idea on a card. Even if you don’t know yet that the character’s name is Roger Thornhill and the plane is being piloted by an assassin sent by a foreign agent named Vandamm. When you see in your mind’s eye people clambering about on the presidents’ faces at Mount Rushmore, figuring out how the two scenes connect is outlining.

A story is based on the actions of the characters, and these actions occur due to decisions they make. All stories have characters. Authors devise characters just as they devise plots. Often, the act of outlining a story cannot be easily separated into working on plot or on character. Indeed, why would any author want to? Characters arise out of plot ideas as much as plots arise out of ideas for characters.

Characters that function well within a story usually exhibit certain properties or attributes. We are not talking about height or hair colour here. Those might be interesting, but they are not structurally relevant to the story.

Far more important in developing a story are each character’s motivations (problems, want, goal, needs) and the obstacles he or she must overcome. Figuring these things out is part of outlining. By doing so, the author will at the same time be devising the plot.

The Pros And Cons Of Outlining

There are significant benefits to outlining. For a start, going through the process usually entails fewer rewrites later. When the author knows the direction of the storyline, it is easier to keep all its threads under control while writing. Without this direction, there is a danger of losing the plot half way through.

Words are to authors what bricks are to builders. Before builders start placing bricks one atop the other, they consult an architect’s plan. More so than the builder’s bricks, this plan determines whether the building fulfils its function and is aesthetically pleasing. The same is true of stories.

A solid structure for your story can help turn it into a satisfying experience for the reader. To get a structure just so, it is best not to leave it to chance or solely to intuition.

In some cases, the author may not know how the story ends and choose to write as fancy dictates. During such a writing process, it might begin to feel like the characters are dictating the action, and the author is merely “capturing” the story rather than actively creating it.

Artists get so deeply immersed in the creative process that their entire consciousness is involved, and the outside world is temporarily excluded. Authors refer to the “flow” state. Usually this is attributed to the act of writing.

However, it may just as easily occur during the act of creating a world, structuring a plot, or developing a character.

Both writing a beautiful text and shaping a compelling story require intuition as well as technique, or craft. In either case, it is possible to “get lost” in the moment, dive so deeply into the process that externals are locked out, and creativity “flows”.

It seems indisputable that narrative structure is more satisfying for readers when the story ends with a resolution to the problems it opened with. Furthermore, readers tend to expect all the loose ends to be neatly tied up by the end of a story. With which writing process the author achieves this feat is, for the audience, irrelevant.

In any case, a certain amount of revision and rewriting is inevitable. Having said that, at least in theory the pantser is likely to spend far more time rewriting than the plotter.

“Every detail is a prophecy.”

Because of foreshadowing. As Jorge Luis Borges put it, “Every episode in a careful narrative is a premonition, … every … detail a prophecy.”

A famous example of foreshadowing, or set-up/pay-off, is Chekhov’s gun. When a gun is seen in Act 1, it is clear it will go off before the end of the story.

Unlike readers, authors must work backwards. If a gun is fired at the climax, then it makes sense to place clues earlier in the narrative that this will happen. The emotional effect on the reader is significantly greater if such events are “set up”.

Hence after the first draft, an author may go over the manuscript to find places to drop such clues, place the set-ups, premonitions, prophecies.

However, “careful” authors, who know where the narrative is heading, include the set-ups, the foreshadowing, in the narrative as constituent parts. They plan the prophetic details as integral elements of the story. In this way, such details feel less conspicuous and more organic. Fiction Without Friction – A Contest For Plotters

Essentially, outlining is another word for story development. Some editors specialise in developmental editing, where tidying up the text is not the issue. When writing a screenplay instead of a novel, collaboration (with director, producer, other screenwriters) is often part of the process.

No surprise, then, that there are tools for outlining. One story development tool is currently running a contest for stories. The winning outline will win online publication in 85 territories via over 40 eBook stores. Deadline for submissions is 2nd June 2017.

Click here for details: Submit Your Story: “Fiction without Friction” by Olaf Bryan Wielk. Olaf worked for top German book publishers for many years before he founded the author tool Beemgee.com. He tells his story here. Follow him on Twitter and Facebook. Image © Annette Bohn