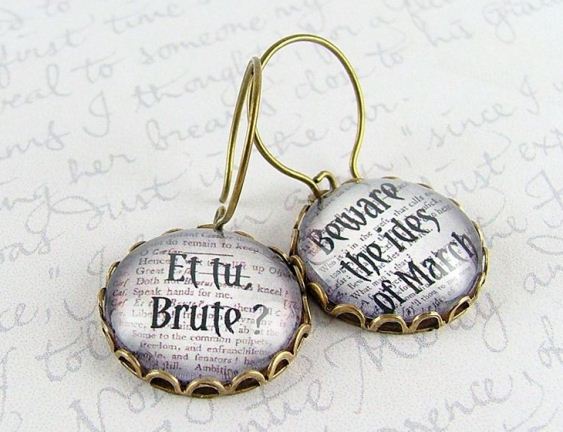 Writers Write is a resource for writers. In this post, we look at the Ides of March. What does it mean and when was it used?

The Ides of March

The Ides of March was the usual way of saying ’15 March’ in Roman times. The idea of the Ides being dangerous was created by Shakespeare. Each month has an Ides (often the 15th) and this date was not associated with death or foreboding before the play was written.

In William Shakespeare‘s The Tragedy of Julius Caesar

, written in 1599, ‘Beware the Ides of March’ is the soothsayer’s message to Julius Caesar, warning him of his death on 15 March 44 BC.

The Tragedy of Julius Caesar

The famous quotation from the play: ‘Et tu, Brute?‘ is a Latin phrase that means ‘and you, Brutus?’ It is spoken by Julius Caesar to his friend Brutus at the moment of Caesar’s assassination. The phrase is often used to show an unexpected betrayal by a friend.

What are the Ides?

The months of the Roman calendar were arranged around three named days – the Kalends, the Nones and the Ides. Other days were calculated around these reference points:

The Ides is also a day marked by several religious observances and was notable for the Romans as a deadline for settling debts.

If you want to learn more about William Shakespeare, read these: