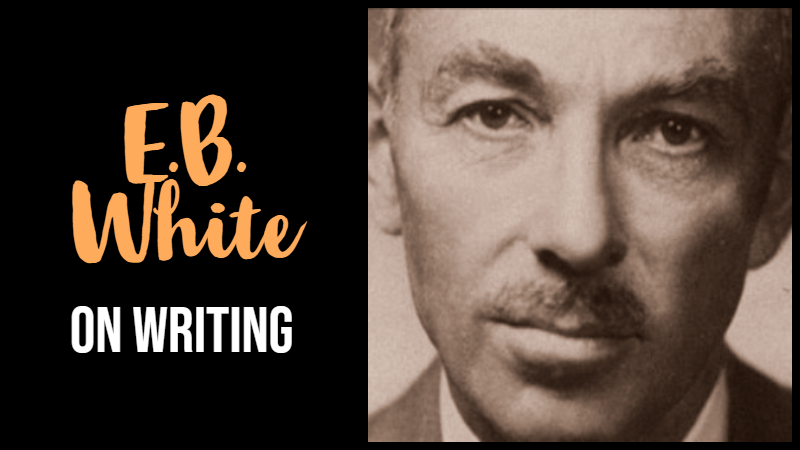 E.B. White On Writing With Style

He is well-known for co-writing the book on writing known as “Strunk & White”. He also wrote books for children, and his most popular titles include Charlotte’s Web, Stuart Little, and The Trumpet of the Swan.

E.B. White On Writing With Style

In the final chapter of The Elements of Style, White presented 21 ‘suggestions and cautionary hints’ to help writers develop an effective style. He prefaced those hints with this warning:

“Young writers often suppose that style is a garnish for the meat of prose, a sauce by which a dull dish is made palatable. Style has no such separate entity; is non-detachable, unfilterable. The beginner should approach style warily, realizing that it is himself he is approaching, no other; and he should begin by turning resolutely away from all devices that are popularly believed to indicate style—all mannerisms, tricks, adornments. The approach to style is by way of plainness, simplicity, orderliness, sincerity.
Writing is, for most, laborious and slow. The mind travels faster than the pen; consequently, writing becomes a question of learning to make occasional wing shots, bringing down the bird of thought as it flashes by. A writer is a gunner, sometimes waiting in his blind for something to come in, sometimes roaming the countryside hoping to scare something up. Like other gunners, he must cultivate patience; he may have to work many covers to bring down one partridge.”

You’ll notice that while advocating a plain and simple style, White conveyed his thoughts through artful metaphors.

Despite the prescriptive tone of The Elements of Style, White’s own applications of grammar and syntax were primarily intuitive, as he once explained in The New Yorker:

“Usage seems to us peculiarly a matter of ear. Everyone has his own prejudices, his own set of rules, his own list of horribles… .
The English language is always sticking a foot out to trip a man. Every week we get thrown, writing merrily along… . English usage is sometimes more than mere taste, judgement, and education—sometimes it’s sheer luck, like getting across a street.”

E.B. White On Not Writing

In a book review titled ‘Writers at Work’, White described his own writing habits—or rather, his habit of putting off writing:

“The thought of writing hangs over our mind like an ugly cloud, making us apprehensive and depressed, as before a summer storm, so that we begin the day by subsiding after breakfast, or by going away, often to seedy and inconclusive destinations: the nearest zoo, or a branch post office to buy a few stamped envelopes. Our professional life has been a long shameless exercise in avoidance. Our home is designed for the maximum of interruption, our office is the place where we never are…. Yet the record is there. Not even lying down and closing the blinds stops us from writing; not even our family, and our preoccupation with same, stops us.”