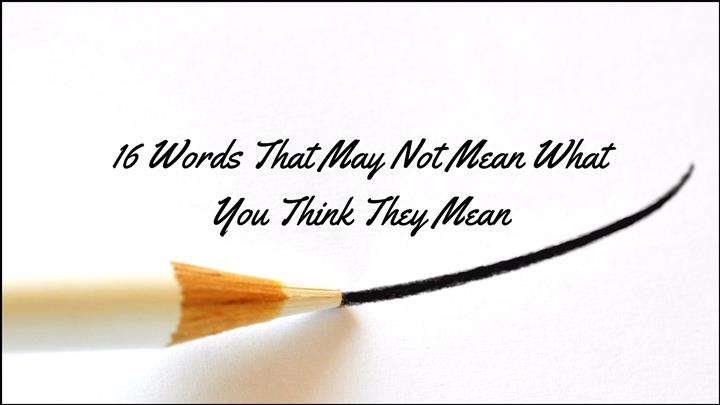 Writers Write shares writing tips and resources. In this post, we share 16 words that may not mean what you think they mean.

16 Words That May Not Mean What You Think They Mean

To comprise is to enclose or include. Comprise is used in the active voice; therefore, “comprised of” is not correct. For example, The university comprises six colleges and nine divisions. Comprise is often confused with compose, which means to make up or be a constituent of. Compose can be used in the passive voice. The company is composed of four employees.

Forgo means to do without, bypass, or abstain from. It is often confused with forego (as in “a foregone conclusion”), which means to precede. For instance, Liz was so engrossed in her book that she decided to forgo lunch and read instead.

Imply is often used incorrectly as a synonym for infer.To imply is to speak indirectly or suggest.You are implying that bank robbery is our only alternative. To infer is to surmise or conclude. I infer from your statement that you agree with this solution. Remember that one draws an inference.

Literally means “in the exact meaning of the word(s),” and use of this word permits no figurative use or exaggeration. For instance, this sentence—Editing that article literally killed me—means that you died at your desk.

Poisonous—often confused with venomous—means a plant, animal, or substance capable of causing death or illness if taken into the body. Venomous means capable of injecting venom. A rattlesnake is not itself poisonous, because if you eat one it won’t poison you. A blowfish will kill you if you eat it, so it is poisonous, but not venomous.

In science writing, precision is how close a set of measured values are to each other. Precision is often confused with accuracy, which means how close a measured value is to the true value. Confused? As explained on Mathisfun.com, “If you are playing soccer and you always hit the left goal post instead of scoring, then you are not accurate, but you are precise!”

Unique means being the only one of its kind, unlike anything else. It does not mean simply “unusual” or “rare.” For example, something isn’t “very unique.” It’s just unique.

Averse means opposed or having a strong disliking to something. For example: He was averse to the idea of using a new style guide. Averse is often confused with adverse, which means unfavourable or harmful. Report any adverse effects from the medication to your physician.

To be bemused is to be puzzled, bewildered, or confused. I am quite bemused by your inconsistent use of the serial comma. Be careful not to confuse bemuse with amuse.

Decimate is another word with a meaning that has changed over time. Historically, decimate means to reduce by 10 percent or to kill one of every 10. Here’s an example: In the Roman armies, it was common practice to decimate any group of mutineers. In modern usage, decimate means to kill, destroy, or remove a large proportion of; to severely reduce or to destroy. The latest round of cuts decimated our advertising budget.

Ensure—often confused with insure—means to make sure or certain. For instance: You need to ensure there are no errors in the article. Insure means to take precaution in advance or protect against financial loss. He failed to insure his home against flooding.

An epic is an extended narrative poem celebrating the feats of a legendary or traditional hero. It can also be a long film, book, or other work portraying heroic deeds and adventures or covering an extended period of time.

Facetious means flippant or treating a serious issue with inappropriate humor. I don’t appreciate your facetious attitude about spelling. Facetious should not be confused with sarcastic, which refers a cutting, ironic remark meant to insult or scorn.

If you are nonplussed, it means you are bewildered or unsure of how to respond. The CEO’s tirade left me completely nonplussed. Nonplussed is often thought to mean calm or relaxed.

Verbiage is not a synonym for wording, content, or language. It means an excess of words for the purpose; wordiness or verbosity. For example, Most press release quotes are riddled with irrelevant verbiage.

Taken from 8 words & 8 more words that may not mean what you think they mean.

by Laura Hale Brockway, a medical writer and editor from Austin, Texas. She is also the author of the writing/editing/random thoughts blog, impertinentremarks.com.