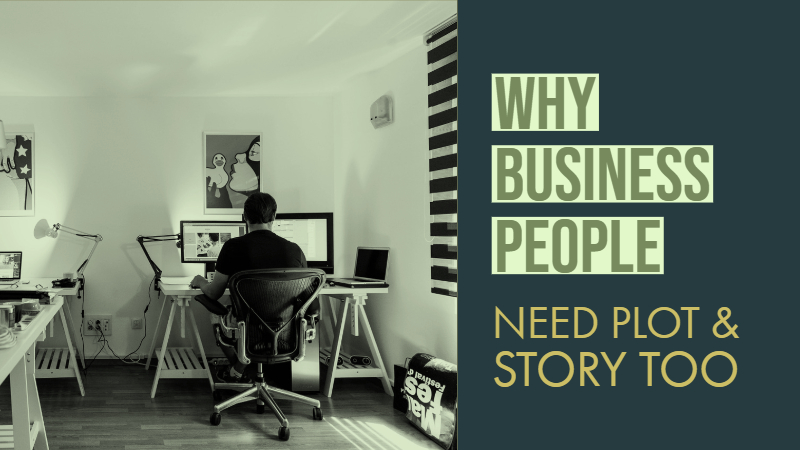 Can the corporate world use the tools of a fiction writer? What part can character and plot play in business communication?

Storytelling in the business world

When I talk about telling stories at work, I don’t mean gossiping around the water cooler. While some executives think that statistics convince people and that dryness is a sign of excellence, the best business creators have always known the power and value of a story.

Story can do much more than engage an audience. Even for a biker in a black leather jacket on a Harley-Davidson (Harley is just a motorcycle manufacturer, right?), story helps people identify deeply with a brand. According to Columbia University’s Frank Rose,  the power of immersive story reaches its peak ‘when the audience forgets that it’s an audience at all’.

For such reasons, storytelling became a trend in the business world, if not a fad. It was written up in the Harvard Business Review fifteen years ago. Columbia Business School now offers a two-day Strategic Storytelling Program for $3,750. Dale Carnegie and dozens of consultants offer similar training.

And what do business storytelling consultants talk about? Some of the same subjects that we cover at Daily Writing Tips, such as how to find the basic plot type of your business. Every business has plot, conflict and even characters. You have a goal, obstacles to reaching it, and people who help you to reach it (or try to prevent you). As we have said, the best stories have falls or fails, not just rises. Showing how your business overcame its vulnerabilities makes your story more attractive to customers. The story of your business becomes more engaging when it has a story arc. How has your business dealt with its problems over time? How have you changed over time? It’s okay to admit past weaknesses. They humanise your business, make you more approachable, and show that you can handle change and adversity. If your business became better in the past, maybe it can keep improving in the future.

Your proposals should have a plot: What problem did our customers encounter? What happened to them? How did they feel? How did we find a solution? How will these customers experience a happy ending if we roll out this solution company-wide? Even when you write a memo, your boss wants to know “How does the story end?” What conflict are you resolving? What should she do with your information?

Research shows that, especially today, people buy products because of stories they hear from other people. About 30% say they trust product reviewers, 24% trust other people they know – but only 20% trust what the brand says about its products. When you tell your story as a story, your loyal customers can retell it to others.

Like many absorbing stories, maybe your story starts with pain: someone was hurting.  Perhaps someone who sounds like your customer’s boss, or boss’s boss, or her boss’s typical client. Perhaps your story is about someone facing problems also faced by her company or clients. But, as you tell in your story, you took action: you found a solution and it worked. Perhaps you could do it again. True stories at the job interview

When you interview for a new job, one of the best ways to communicate your qualifications is tell your story. You don’t win that dream job by saying, “I am skilled, experienced, passionate, motivated, creative, successful,  and an expert in specialised strategic leadership.”

For one thing, in a single sentence, you’ve used all ten of LinkedIn’s top U.S. buzzwords for 2018. Now that they’ve lost their impact through overuse, maybe you should lose them too. For another thing, without a story behind them, no one can tell how they apply specifically to you – or if they apply at all. Who knows, maybe you copied them from an article called ‘Best Resume Adjectives for 2014’.

In 1902, the founders of what became Minnesota Mining and Manufacturing Company had just invested heavily in a Colorado mine, hoping to become a leading miner of corundum abrasives. Unfortunately, the mineral in their mine wasn’t corundum but a useless rock, which probably explained why their first customer was having trouble grinding anything with it.

Well, nothing fosters a culture of innovation like utter failure. Eventually they did succeed in making sandpaper, but in the meantime, since they had learned a lot about making sand adhere to paper, they decided to try making adhesives. That worked out even better.

Eventually, they shortened their name to the 3M Corporation. Their accidental invention of Post-It Notes later (“Oh, this worthless adhesive will hardly hold a tiny piece of paper!”) is another story.

In the early 1960s, Formula 409 was a successful cleaning spray. One reason for its success: as a niche product, they didn’t have to compete with the worldwide giant Procter & Gamble. Unfortunately, that didn’t last. P&G created their own cleaning spray, called it Cinch, and decided to test it in the Denver market.

How could Formula 409 possibly out-market one of the world’s great marketers? They couldn’t, of course. Instead, they took 409 off the shelves of every store in Denver. As a result, the Cinch test in Denver was a great success for P&G, who began spending heavily in preparation for a nationwide launch. After all, their forecasts justified it.

Meanwhile, Formula 409 launched a national promotion: they sold a large bottle of 409 – a six months supply – for the same price as a regular bottle. So when Cinch began its nationwide launch, most potential customers didn’t buy any. Why should they? They had just bought a six months supply of cleaning spray. Since Cinch miserably failed to meet its ambitious forecasts, in less than a year it was off the market. by Michael McGinnis. Michael is a writer for DailyWritingTips.com

If you want to learn how to write for business, join us for The Plain Language Programme in Johannesburg.