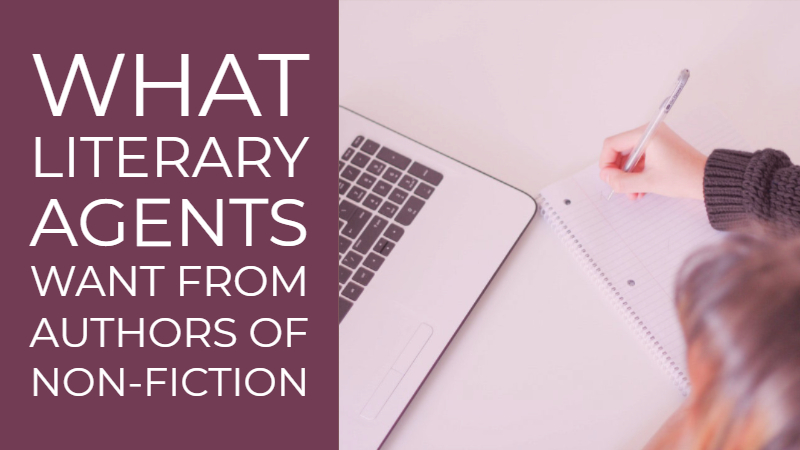 What Literary Agents Want From Authors Of Non-Fiction

As someone working within major trade book publishing in New York City, I am often asked what agencies are looking for from authors of non-fiction. (If you are a fiction writer, read my previous post: What Literary Agents Want From Authors Of Fiction)

I have provided a quick, and hopefully helpful, list used in evaluating a writer of non-fiction.

These are not all of the factors that make writers attractive in the eyes of representatives and publishers. They are some of the major factors that come into consideration.

What Literary Agents Want From Authors Of Non-Fiction

A Strong Platform And An Authority On A Subject

A writer trying to make their way in the non-fiction space will often hear that nonfiction is platform-driven.

Platform can mean any number of things. In the case of a celebrity, that is usually a no-brainer in that a celebrity will have a massive following, especially is they are an A-list or B-list celebrity.

In other cases this can mean being able to show that a writer has hundreds of thousands or a million social media followers or more. That will pique the interest of most any book publisher since they are looking for a built-in audience. There is a good chance that even if just a fraction of a massive audience, such as ten-percent or more, buys the book, then it will be a successful publication.

While platform is key, it is not everything. In other cases, authors can show that they have a platform because they conduct speaking engagements throughout the year to big audiences of hundreds or more.

Or maybe they have a very big newsletter subscriber base. There are other ways of going about constructing one’s own presence so get creative about thinking about it.

A Unique Idea Or Subject

As mentioned in my article on the aspects of fiction that attract publishers, non-fiction is idea-driven, whereas fiction is more about the author becoming a household name by extension of the quality of writing.

Readers of non-fiction tend to seek out nonfiction books more so based on a particular idea or subject matter they are interested in. Sometimes this is a very prescriptive book for a particular need, such as a ‘how to’ kind of book. In other instances, it can be a big idea type of book based on a major movement or event taking place.

In any instance, the manuscript must be unique and able to stand out in a crowded marketplace of books on similar subjects. Proving the particular special angle that the book offers will help in this process.

Similar to mentioning how potential endorsers or blurbs can help a fiction publication, the same is true of non-fiction. Whereas blurbs or endorsements in the fiction space should come from authors writing within the same or similar genre and age group, non-fiction writers should seek out praise from authors that are experts in similar fields or subject areas.

It is okay to use existing author praise or reviews from trade outlets. So, in the case of the popular science author, maybe they have praise or a review from WIRED magazine or a similar publication.

It is also helpful for writers of non-fiction to demonstrate their writing credentials from institutions or other groups.

Sometimes, this is a matter of showing that the author has attended a Bachelor of Fine Arts (BFA) program, Master of Fine Arts (MFA) program, or that they have studied journalism. This can be at the graduate or undergraduate level, even post-graduate.

Writers can include that they have attended prestigious writers’ workshops or conferences, perhaps even well-known writer groups or communities and organisations, and so on.

Less important in the case of non-fiction, but it can help a nonfiction writer’s writing abilities in the eyes of a book publisher if they can demonstrate their aptitude for writing a book. Experience and credentials could include a background in journalism, another similar writing degree, publications in journals or magazines, and so on.

The writing can usually speak for itself but not always when an editor is trying to convince their editorial acquisitions board to take on a manuscript for publication Otherwise the book publisher might come to think that the manuscript would require the help of a seasoned co-writer or ghostwriter.

As a part of the non-fiction writer demonstrating their platform, it is important to show that their online presence is strong and has big or impressive numbers. The social media audience should not only be large, but also engaged.

Again, there are other ways of constructing platform, so at the very least, an online presence can show that venues exist for connecting with more potential readers and fans. Building this can take time, but luckily there are books written on the subject.

It is important that whichever type of online presence is chosen, that it feels natural rather than forced. Organic is always best. Otherwise an online platform will exist without any engagement from the writer and their audience.

The process of assembling comp (comparative or competitive) titles, is often deeply explored in the competitive review section of most non-fiction book proposals. Presenting at least a few similar books on the same or similar subject matter, that were bestsellers published within the last five years, can help to hold a manuscript in high esteem. It demonstrates the potential success of a publication and shows that the marketplace is firm to such a book and its subject matter.

Hopefully this article proves helpful to any writer looking to put together a checklist.

While this list does not include everything, it does contain many of the major items publishers use in evaluating the sales potential of a non-fiction book.

Authors should not worry about covering every base here, but having at least some of these items in place will greatly help. If you enjoyed this, read What Literary Agents Want From Authors Of Fiction