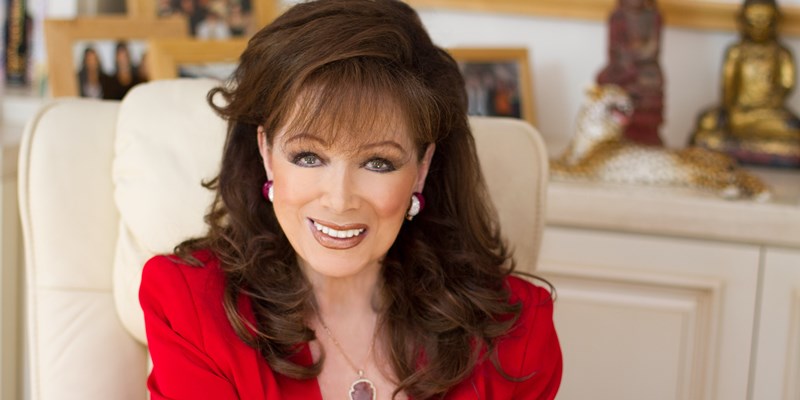 Writers Write creates writing resources and shares writing tips. In this post, we share our interview with Jackie Collins. Anthony Ehlers was lucky enough to catch up with bestselling author, Jackie Collins on her recent tour of South Africa to promote Drop Dead Beautiful. She shared her advice on writing, sex, women – and even her favourite recipe!

Jackie Collins is one of the few authors to become a celebrity in her own right.

She’s shifted some 400 million books in her almost 40 year career as the reigning queen of the Tinsel Town bonkbuster. She’s hosted her own TV show on E! Entertainment and many of her books have been developed into movies and TV series.

She’s friends with Paris Hilton, lives next door to Al Pacino and gets to share entrées with Sly Stallone at cosy Beverly Hills dinners. This year alone she’s been on a whirlwind book tour and is judging the Miss World pageant in China.

Not bad for a rebellious teenager who got kicked out of school at 15 for truancy. “I’m proof that if you follow your dream, you can do anything,” she says.

Steamy sex, salacious gossip, vicarious titillation and raunchy adventure are the potent ingredients of her 25 bestselling novels. The fun of a new Jackie Collins novel is playing the Hollywood guessing game.

Jackie is known for giving her adoring fans an unrivalled insider’s peek of the stars – all the stuff you don’t get in Heat or People magazine. “I write about real people in disguise,” she confesses. “If anything, my characters are toned down – the truth is much more bizarre!”

It’s a sure fire recipe for success, but shred the glitz and sleaze and there’s always a strong message from the woman director Louis Malle hailed as a ‘raunchy moralist’.

Her first book, The World is Full of Married Men

, was a controversial breakthrough novel in the late 60s – it was the first time an author had attacked the double standard when it came to extramarital affairs.

“I really wanted to address the inequality between men and women,” she says. “I wanted to create really strong women in my books. I believe women are stronger than men. My message to women is always – you can do anything!”

She says it’s important for a woman to have a “passion in life” – something other than her husband or children. “Whether it’s designing jewellery or baking cookies and selling them, you have to have something you do just for you,” she says. “Because your children will leave the nest, your husband will be slaving over a hot secretary – where will that leave you?”

That’s not to say every husband is the kind of oversexed Lothario that prowls the pages of her steamy books. “I’m a believer in great married sex,” she says. “You have to keep the fires burning – whether it’s getting someone to baby-sit the kids for the night or role playing in the bedroom.”

Jackie Collins is like the fabled Scheherazade in Arabian Nights, telling endless stories to the King to keep herself alive. Jackie is a born storyteller. Her passion for her work comes through in her enthusiasm, her humour, her entire personality. She loves what she does – and it shows!

In many ways, Jackie was before her time in terms of novel writing – short sentences, short paragraphs, short chapters and lots of dialogue. All the principles we cover in Writers Write, our flagship novel writing course. “I got a lot of flak for that in the 70s when I started out,” she says. “Now everyone is doing it!”

Giving a philosophical shrug, she adds, “I never wanted to be – or pretended to be – a literary writer. I just want to tell a good story.”

And that she does! Her legions of fans are hooked on her raunchy, funny, nail-biting books – whether it’s her Hollywood series (Hollywood Wives

Jackie is an organic writer – or what is sometimes called a Non Outline Person. She doesn’t plot. She doesn’t think ahead. “For me it’s all about the characters,” she says. “I spend a lot of time with them, thinking about them – and then I let them take me on a journey, an adventure.”

As encouraged in Writers Write, Jackie also writes her novel in longhand. “I have everything technological from an iPod to TiVo, so I enjoy getting away from it when I write,” she explains. “I think there is a definite hand-brain connection. I also enjoy my own handwriting, so it’s more enjoyable. It also means I can move around the house while I write and avoid that horrible Getting To The Desk Syndrome.”

When she isn’t writing, travelling or partying with the In Crowd in LA, she admits she likes nothing better than cooking for her family on a Saturday night (she even shared a recipe – see below), watching TV – she’s hooked on Grey’s Anatomy and Desperate Housewives – and reading a good book.

At the end of each book, Jackie treats herself to jewellery – “it’s important to reward yourself,” she says. Judging from the antique ruby Cartier jewellery she was wearing, it’s a safe bet that her new book, Married Lovers, must be near completion.

Jackie Collins’ latest Lucky Santangelo novel is out now. Drop Dead Beautiful is available in all good book stores. Find out all the latest news on www.jackiecollins.com

JACKIE COLLINS’ MEATLOAF – Perfect for Saturday night with the family!