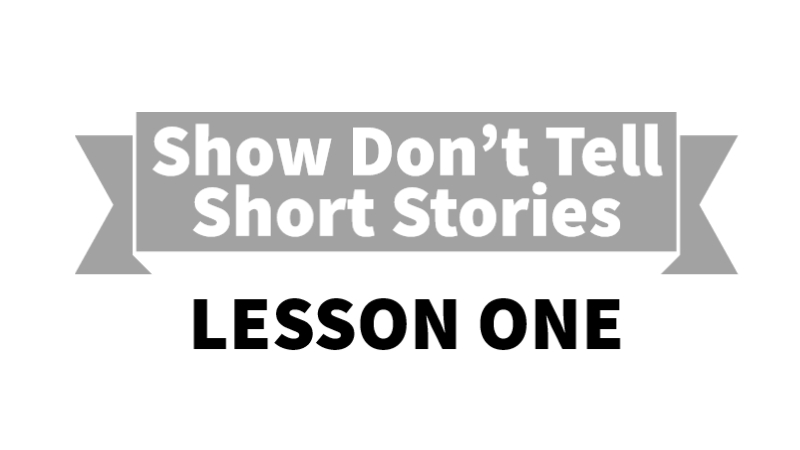 Lesson 1: How To Show And Not Tell In Short Stories

This is the first of nine lessons in the ‘How to Show and Not Tell in Short Stories’ course. We hope you enjoy them!

NOTE: If you want a downloadable, printable PDF of this course, you can buy one for a small fee from our store. The workbook is an advert-free, easy-to-download version of the online course.

‘Show, don’t tell’ is valuable advice for any writer. But even more so for a short story writer. The limited word count in a short story means our writing has to work much harder. We don’t have 80 000 words to explain and describe, but the reader still needs to understand. Let’s look at how we achieve it.

In novel writing, there is room for telling, but in a short story, ‘showing’ will help us convey more with fewer words. There are a few steps you can take to change your writing from ‘telling’ to ‘showing’, and we’ll be discussing them in the lessons.

“Show the readers everything, tell them nothing.” ~Ernest Hemingway

Why should you ‘show’?

‘Showing’ brings our stories to life. It helps our characters jump off the page. It allows our readers to make an emotional connection with our stories much faster. When we ‘show’, our readers participate in the scene. When we ‘tell’, they only observe the scene.

It was a dark and stormy night. The shutters were flapping in the wind. The noise woke the man. He looked out the window at the harbour. The wind was blowing, and the boats were at its mercy. The moorings needed to be checked before it was too late. One was coming undone.
The man opened the window and tried to grab the shutter, but he couldn’t get it closed. Another man, his brother, came in and said they’d do it from the outside. It was raining a lot and he grabbed his slicker. The wind blew and blew. He saw the yacht dip and bob again and he could hear when it hit the wood jetty. He felt the rain coming down hard. The lighthouse lit up the harbour and showed him how bad it was. The men saw something in water. It was their father who had gone done already. His brother rushed down to the water and the man went to radio the coastguard.

It was the slap-bang-slap of the shutters that woke him. The howling wind had tugged them loose. He slid the window up and tried to grab at the swinging shutters, but the wind grabbed it back.
We’ll have to get it from the outside,” Collin said behind him. “Dad’s already on his way down to secure the moorings. The yacht has come undone.”
He tried to reach the shutter again, but the wind held it back. “Dammit.” He grabbed his slicker and followed his brother.
The rain pelted them as they picked their way down the path. The swell was huge, and the waves crashed with merciless abandon. The yacht hit the jetty with another thud and something splintered.
“Can you see, Dad?” Collin asked.
They peered into the dark as the beam of the lighthouse slid silent and calm across the raging water. The waves whipped white with fury.
“What’s that?” Jack tried to get a better look.
A small speck of red reached up before the wave crushed it and slipped away.
“Dad!” Collin screamed.
Jack ran to radio the coastguard.

In the first example, there is more distance between the reader and the story. We know very little about the brothers and their relationship with their father. In the second example their actions are more emotional and specific.

2. Zoom in on your story

When we ‘write small’, it’s easier to know which details are important and what to highlight.

A viewpoint character will help you to focus your writing.

In the first example, we’re being told what the weather was like. In the second, we can almost feel it. We should try to avoid the use of the words see, hear, feel, smell, and touch.

5. Be specific with your descriptions

We have to make sure our descriptions work hard. By being specific, we can layer details.

Change these sentences from ‘telling’ to ‘showing’. You can use any of the tools mentioned above.

We will be discussing each of these 7 points in detail in the next lessons. I look forward to sharing this journey with you.

NOTE: If you want a downloadable, printable PDF of this course, you can buy one for a small fee from our store. The workbook is an advert-free, easy-to-download version of the online course.