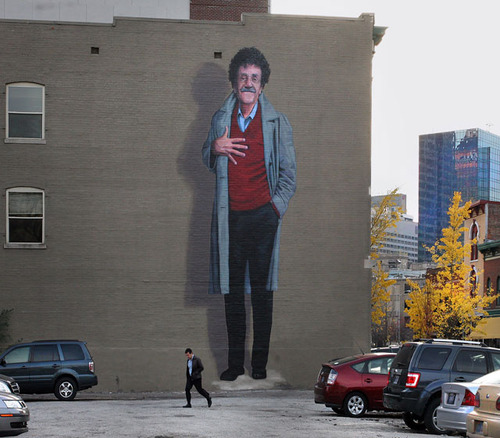 15 Things Kurt Vonnegut Said Better Than Anyone Else

1.   “I urge you to please notice when you are happy, and exclaim or murmur or think at some point, ‘If this isn’t nice, I don’t know what is.’”

The actual advice here is technically a quote from Kurt Vonnegut’s ‘good uncle’ Alex, but Vonnegut was nice enough to pass it on at speeches and in A Man Without a Country

. Though he was sometimes derided as too gloomy and cynical, Vonnegut’s most resonant messages have always been hopeful in the face of almost-certain doom. And his best advice seems almost ridiculously simple: Give your own happiness a bit of brain space.

In Cat’s Cradle, the narrator haplessly stumbles across the cynical, cultish figure Bokonon, who populates his religious writings with moronic, twee aphorisms. The great joke of Bokononism is that it forces meaning on what’s essentially chaos, and Bokonon himself admits that his writings are lies. If the protagonist’s trip to the island nation of San Lorenzo has any cosmic purpose, it’s to catalyse a massive tragedy, but the experience makes him a devout Bokononist. It’s a religion for people who believe religions are absurd, and an ideal one for Vonnegut-style humanists.

Another koan of sorts from Cat’s Cradle and the Bokononist religion (which phrases many of its teachings as calypsos, as part of its absurdist bent), this piece of doggerel is simple and catchy, but it unpacks into a resonant, meaningful philosophy that reads as sympathetic to humanity, albeit from a removed, humouring, alien viewpoint. Man’s just another animal, it implies, with his own peculiar instincts, and his own way of shutting them down. This is horrifically cynical when considered closely: If people deciding they understand the world is just another instinct, then enlightenment is little more than a pit-stop between insoluble questions, a necessary but ultimately meaningless way of taking a sanity break. At the same time, there’s a kindness to Bokonon’s belief that this is all inevitable and just part of being a person. Life is frustrating and full of pitfalls and dead ends, but everybody’s gotta do it.

This line from God Bless You, Mr. Rosewater

comes as part of a baptismal speech the protagonist says he’s planning for his neighbours’ twins: ‘Hello, babies. Welcome to Earth. It’s hot in the summer and cold in the winter. It’s round and wet and crowded. At the outside, babies, you’ve got about a hundred years here. There’s only one rule that I know of, babies—God damn it, you’ve got to be kind.’ It’s an odd speech to make over a couple of infants, but it’s playful, sweet, yet keenly precise in its summation of everything a new addition to the planet should need to know. By narrowing down all his advice for the future down to a few simple words, Vonnegut emphasizes what’s most important in life. At the same time, he lets his frustration with all the people who obviously don’t get it leak through just a little.

A couple of pages into Cat’s Cradle, protagonist Jonah/John recalls being hired to design and build a doghouse for a lady in Newport, R.I., who “claimed to understand God and His Ways of Working perfectly.” With such knowledge, “she could not understand why anyone should be puzzled about what had been or about what was going to be.” When Jonah shows her the doghouse’s blueprint, she says she can’t read it. He suggests taking it to her minister to pass along to God, who, when he finds a minute, will explain it “in a way that even you can understand.” She fires him. Jonah recalls her with a bemused fondness, ending the anecdote with this Bokonon quote. It’s a typical Vonnegut zinger that perfectly summarises the inherent flaw of religious fundamentalism: No one really knows God’s ways.

6.  “Many people need desperately to receive this message: ‘I feel and think much as you do, care about many of the things you care about, although most people do not care about them. You are not alone.’”

In this response to his own question—”Why bother?”—in Timequake, his last novel, Vonnegut doesn’t give a tired response about the urge to create; instead, he offers a pointed answer about how writing (and reading) make a lonesome world a little less so. The idea of connectedness—familial and otherwise—ran through much of his work, and it’s nice to see that toward the end of his career, he hadn’t lost the feeling that words can have an intimate, powerful impact.

7.  “There are plenty of good reasons for fighting, but no good reason ever to hate without reservation, to imagine that God Almighty Himself hates with you, too.”

(published in 1961), its wisdom and ugly truth still ring. Vonnegut (who often said “The only difference between Bush and Hitler is that Hitler was elected”) was righteously sceptical about war, having famously survived the only one worth fighting in his lifetime. And it’s never been more true: Left or right, Christian or Muslim, those convinced they’re doing violence in service of a higher power and against an irretrievably inhuman enemy are the most dangerous creatures of all.

8.  “Since Alice had never received any religious instruction, and since she had led a blameless life, she never thought of her awful luck as being anything but accidents in a very busy place. Good for her.”

(he himself graded it a “D”) was inspired by his sister Alice, who died of cancer just days after her husband was killed in an accident. Vonnegut’s assessment of Alice’s character—both in this introduction and in her fictional stand-in, Eliza Mellon Swain—is glowing and remarkable, and in this quote from the book’s introduction, he manages to swipe at a favourite enemy (organised religion) and quietly, humbly embrace someone he clearly still missed a lot.

9.  “That is my principal objection to life, I think: It’s too easy, when alive, to make perfectly horrible mistakes.”

is alluding both to his father’s befriending of Hitler and his own accidental murder of his neighbour, but like so many of these quotes, it resonates well beyond its context. The underlying philosophy of Vonnegut’s work was always that existence is capricious and senseless, a difficult sentiment that he captured time and again with a bemused shake of the head. Indeed, the idea that life is just a series of small decisions that culminate into some sort of “destiny” is maddening, because you could easily ruin it all simply by making the wrong one. Ordering the fish, stepping onto a balcony, booking the wrong flight, getting married—a single misstep, and you’re done for. At least when you’re dead, you don’t have to make any more damn choices. Wherever Vonnegut is, he’s no doubt grateful for that.

10.  “Literature should not disappear up its own asshole, so to speak.”

Vonnegut touchstones like life on Tralfamadore and the absurd Bokononist religion don’t help people escape the world so much as see it with clearer reason, which probably had a lot to do with Vonnegut’s education as a chemist and anthropologist. So it’s unsurprising that in a “self-interview” for The Paris Review, collected in his non-fiction anthology Palm Sunday, he said the literary world should really be looking for talent among scientists and doctors. Even when taking part in such a stultifying, masturbatory exercise for a prestigious journal, Vonnegut was perfectly readable, because he never forgot where his true audience was.

11.  “All persons, living and dead, are purely coincidental.”

, he interacts freely with Kilgore Trout and other fictional characters after the end of a “timequake,” which forces humanity to re-enact an entire decade. (Trout winds up too worn out to exercise free will again.) Vonnegut writes his own fitting epigram for this fatalistic book: “All persons, living and dead, are purely coincidental,” which sounds more funny than grim. Vonnegut surrounds his characters—especially Trout—with meaninglessness and hopelessness, and gives them little reason for existing in the first place, but within that, they find liberty and courage.

Even when Vonnegut dared to propose a utopian scheme, it was a happily dysfunctional one. In Slapstick, Wilbur Swain wins the presidency with a scheme to eliminate loneliness by issuing people complicated middle names (he becomes Wilbur Daffodil-11 Swain) which make them part of new extended families. He advises people to tell new relatives they hate, or members of other families asking for help: “Why don’t you take a flying fuck at a rolling doughnut? Why don’t you take a flying fuck at the mooooooooooooon?” Of course, this fails to prevent plagues, the breakdown of his government, and civil wars later in the story.

Unlike many of these quotes, the repeated refrain from Vonnegut’s classic Slaughterhouse-Five isn’t notable for its unique wording so much as for how much emotion—and dismissal of emotion—it packs into three simple, world-weary words that simultaneously accept and dismiss everything. There’s a reason this quote graced practically every elegy written for Vonnegut over the past two weeks (yes, including ours): It neatly encompasses a whole way of life. More crudely put: “Shit happens, and it’s awful, but it’s also okay. We deal with it because we have to.”

14.  “I have been a soreheaded occupant of a file drawer labelled ‘science fiction’ ever since, and I would like out, particularly since so many serious critics regularly mistake the drawer for a urinal.”

Vonnegut was as trenchant when talking about his life as when talking about life in general, and this quote from an essay in Wampeters, Foma & Granfalloons is particularly apt; as he explains it, he wrote Player Piano while working for General Electric, “completely surrounded by machines and ideas for machines,” which led him to put some ideas about machines on paper. Then it was published, “and I learned from the reviewers that I was a science-fiction writer.” The entire essay is wry, hilarious, and biting, but this line stands out in particular as typifying the kind of snappishness that made Vonnegut’s works so memorable.

In Mother Night, apolitical expatriate American playwright Howard W. Campbell, Jr. refashions himself as a Nazi propagandist in order to pass coded messages on to the U.S. generals and preserve his marriage to a German woman—their “nation of two,” as he calls it. But in serving multiple masters, Campbell ends up ruining his life and becoming an unwitting inspiration to bigots. In his 1966 introduction to the paperback edition, Vonnegut underlines Mother Night’s moral: “We are what we pretend to be, so we must be careful about what we pretend to be.” That lesson springs to mind every time a comedian whose shtick relies on hoaxes and audience-baiting—or a political pundit who traffics in shock and hyperbole—gets hauled in front of the court of public opinion for pushing the act too far. Why can’t people just say what they mean? It’s a question Don Imus and Michael Richards—and maybe someday Ann Coulter—must ask themselves on their many sleepless nights.

Kurt Vonnegut was an American novelist, satirist, and graphic artist. He is best known for his books which blend satire, black comedy and science fiction. These include the novels, Cat’s Cradle

, and Breakfast of Champions

. Vonnegut was a self-proclaimed humanist and socialist.