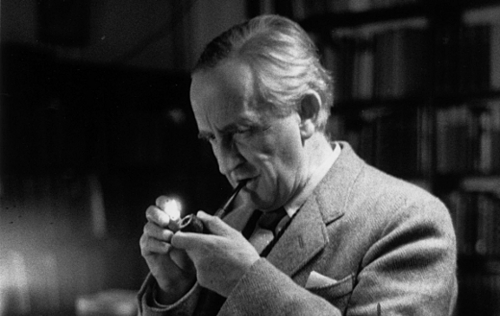 In 1938, some months after the initial publication of The Hobbit, J. R. R. Tolkien and his British publisher, Stanley Unwin, opened talks with Rütten & Loening, a Berlin-based publishing house who were keen to translate the novel for the German market.

All was going well until, in July, they wrote to Tolkien and asked for proof of his Aryan descent. Tolkien was furious, and forwarded their letter to his publisher along with two possible replies — one in which their question was delicately side-stepped, and one, seen below, in which Tolkien made his displeasure known with considerable style.

Thank you for your letter. I regret that I am not clear as to what you intend by arisch. I am not of Aryan extraction: that is Indo-Iranian; as far as I am aware none of my ancestors spoke Hindustani, Persian, Gypsy, or any related dialects. But if I am to understand that you are enquiring whether I am of Jewish origin, I can only reply that I regret that I appear to have no ancestors of that gifted people. My great-great-grandfather came to England in the eighteenth century from Germany: the main part of my descent is therefore purely English, and I am an English subject — which should be sufficient. I have been accustomed, nonetheless, to regard my German name with pride, and continued to do so throughout the period of the late regrettable war, in which I served in the English army. I cannot, however, forbear to comment that if impertinent and irrelevant inquiries of this sort are to become the rule in matters of literature, then the time is not far distant when a German name will no longer be a source of pride.

Your enquiry is doubtless made in order to comply with the laws of your own country, but that this should be held to apply to the subjects of another state would be improper, even if it had (as it has not) any bearing whatsoever on the merits of my work or its sustainability for publication, of which you appear to have satisfied yourselves without reference to my Abstammung.

I trust you will find this reply satisfactory, and
remain yours faithfully,
J. R. R. Tolkien