11 Authors Who Hated The Movie Versions Of Their Books

Disney’s Mary Poppins might be a cherished childhood memory for a lot of us, but for author P.L. Travers, it was a complete slap in the face. Despite having script approval, Travers’ edits were largely disregarded. Travers loathed the movie’s animated sequences and was perturbed that Mary Poppins’ strict side was downplayed. After some heated meetings, Travers reluctantly approved. She would have been shunned from the star-studded premiere had she not shamed a Disney exec into an invite. The 65-year-old Travers spent most of the movie crying and ultimately refused to let Disney touch the rest of the series.

Stephen King probably made movie buffs cringe when he said he hated what Stanley Kubrick did to The Shining. “I’d admired Kubrick for a long time and had great expectations for the project, but I was deeply disappointed in the end result. … Kubrick just couldn’t grasp the sheer inhuman evil of The Overlook Hotel. So he looked, instead, for evil in the characters and made the film into a domestic tragedy with only vaguely supernatural overtones. That was the basic flaw: because he couldn’t believe, he couldn’t make the film believable to others.” He was also unhappy with Jack Nicholson’s performance – King wanted it to be clear that Jack Torrance wasn’t crazy until he got to the hotel and felt that Nicholson made the character crazy from the start. With director Mick Garris, King ended up working on another version of The Shining that aired on ABC in 1997.

After casting was completed for the movie version of Anne Rice’s Interview with the Vampire, she said Tom Cruise was “no more my vampire Lestat than Edward G. Robinson is Rhett Butler.” The casting was “so bizarre,” she said, “it’s almost impossible to imagine how it’s going to work.” When she saw the movie, however, she actually loved Cruise’s portrayal and told him what an impressive job he had done. She still hasn’t come around to liking Queen of the Damned, though, telling her Facebook fans to avoid seeing the film that “mutilated” her books.

Note to filmmakers: don’t anger the author of the book before the sequel has been written. Unhappy with the way Hollywood treated Forrest Gump by omitting plot points and sanitizing some of the language and sex, author Winston Groom started its sequel with the lines, “Don’t never let nobody make a movie of your life’s story,” and “Whether they get it right or wrong, it don’t matter.” You can’t blame Groom for being mad: he sued for the 3% net profits his contract promised him, which he hadn’t received because producers claimed that by the time they took out production costs and advertising and promotional costs, the movie didn’t turn a profit. To add insult to injury, Groom wasn’t mentioned in any of the six Academy Award acceptance speeches given by various cast and crew members of Forrest Gump. 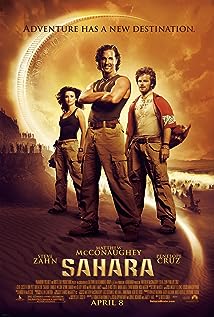 Clive Cussler’s Dirk Pitt tales have a cult following. Dirk Pitt movies don’t, especially 2005’s Sahara starring Matthew McConaughey and Penelope Cruz. In fact, it was a certified flop: the $145 million production made just $68 million at the box office. Cussler said it was because the producer failed to give him total script control as agreed upon and sued for $38 million. He lost. In fact, Cussler was ordered to pay $13.9 million for legal fees incurred by the Sahara production company. Though that order was overturned in 2010, it’s safe to say that Cussler probably won’t be pursuing that relationship again. By the way, the other Dirk Pitt movie adaptation, Raise the Titanic!, was also an epic stinker and was even nominated for the first ever Golden Raspberry Award (in multiple categories). Despite having the star presence of Oscar winners Jason Robards and Alec Guinness, the movie made back less than 20 percent of its $40 million budget.

There’s a reason no one has ever seen a big-screen version of Catcher in the Rye or Franny and Zooey. In the late ‘40s, J.D. Salinger consented to have his short story Uncle Wiggly in Connecticut made into a movie retitled My Foolish Heart. He was so mortified by the swooning love story that he swore his works would never be butchered again.

Not only did Anthony Burgess dislike the movie based on his novella A Clockwork Orange, he later regretted writing any of it in the first place. “The book I am best known for, or only known for, is a novel I am prepared to repudiate: written a quarter of a century ago, a jeu d’esprit knocked off for money in three weeks, it became known as the raw material for a film which seemed to glorify sex and violence. The film made it easy for readers of the book to misunderstand what it was about, and the misunderstanding will pursue me till I die. I should not have written the book because of this danger of misinterpretation.”

Bret Easton Ellis doesn’t think any of the film adaptations of his books are that great (save for maybe The Rules of Attraction), but he dislikes some more than others. Though he worked on 2009’s The Informers, he says, “That movie doesn’t work for a lot reasons but I don’t think any of those reasons are my fault.” And Ellis believes American Psycho never should have happened: “American Psycho was a book I didn’t think needed to be turned into a movie. I think the problem with American Psycho was that it was conceived as a novel, as a literary work with a very unreliable narrator at the center of it and the medium of film demands answers. It demands answers. You can be as ambiguous as you want with a movie, but it doesn’t matter — we’re still looking at it. It’s still being answered for us visually. I don’t think American Psycho is particularly more interesting if you knew that he did it or think that it all happens in his head. I think the answer to that question makes the book infinitely less interesting.”

Ever wonder why Charlie and the Great Glass Elevator hasn’t followed in the silver screen footsteps of its predecessor, Charlie and the Chocolate Factory? Because Roald Dahl felt the movie version of his book was “crummy,” found Gene Wilder’s Willy Wonka to be “pretentious” and “bouncy,” and thought the director had “no talent or flair.” He vowed that film producers would never get their hands on the sequel to similarly ruin it, at least not in his lifetime.

Despite the fact that One Flew Over the Cuckoo’s Nest swept the Academy Awards – it won Best Picture, Best Director, Best Actor, Best Actress and Best Screenplay – author Ken Kesey was not impressed. He was originally slated to help with the production, but left two weeks into the process. Though he claimed for a long time that he didn’t even watch it and was especially upset that they didn’t keep the viewpoint of Chief Bromden, his wife later said that he was glad the movie was made.

Richard Matheson has been annoyed with the adaptations of his book I Am Legend since 1964. The first one, The Last Man on Earth, starred Vincent Price. “I was disappointed in The Last Man on Earth, even though they more or less followed my story. I think Vincent Price, whom I love in every one of his pictures that I wrote, was miscast. I also felt the direction was kind of poor.” Another version, The Omega Man, starred Charlton Heston. “The Omega Man was so removed from my book that it didn’t even bother me,” Matheson said. And when I Am Legend starring Will Smith was announced, the author commented, “I don’t know why Hollywood is fascinated by my book when they never care to film it as I wrote it.” The most recent adaptation, by the way, completely changed Matheson’s ending because it didn’t test well with audiences.