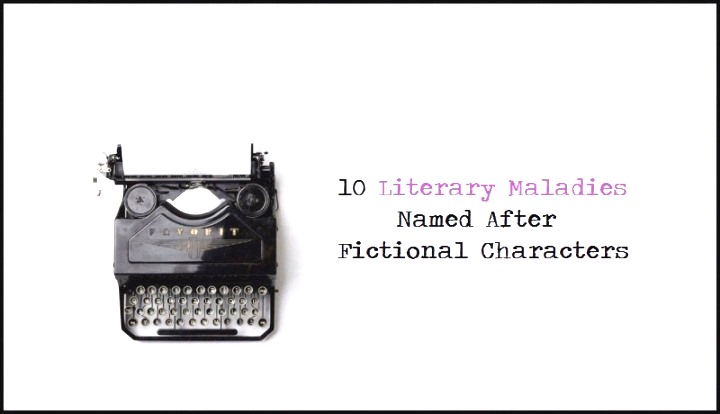 Writers Write is a writing resource. In this post, we have shared 10 literary maladies named after fictional characters.

A syndrome is a disease or a disorder that involves a particular group of signs and symptoms, which consistently occur together. These are normally named after the doctor who diagnoses them, but there are some that have more literary names.

We found this article on Healthmad.com and we thought you would enjoy it as much as we did.

Medically called trichobezoar, this rare condition is characterised by intestinal obstructions caused by eating hair. It occurs mostly in patients diagnosed with trichotillomania, a psychological condition manifested by an uncontrollable urge to pull out head and body hair.

Named after the Shakespearean character that murdered his wife out of intense distrust.

Also called delusional jealousy, it describes a person’s stubborn belief that their mate is being unfaithful. They make incessant groundless accusations of infidelity, taking considerable pains to test their mate’s trustworthiness even to the extent of displaying stalking and violent behaviour.

Named after the vivacious but meticulous, difficult woman, from Oscar Wilde‘s play.

This mycobacterial lung disease exhibits symptoms of a persistent cough, shortness of breath and lethargy; and is typically treated with strong antibiotics and anti-tuberculosis drugs.

Named after the well-loved J.M. Barrie character who refuses to grow up.

Accepted in popular psychology, people with this syndrome display immaturity in most areas of his life; they shun responsibility, oppose accepted norms, focus more on fantasies than on reality, and often need to be mothered.

Named after the main character in The Jungle Book by Rudyard Kipling.

This syndrome is used to describe children with weak mental and/or physical traits, especially those who have suffered tremendous emotional stress due to parental neglect and abuse. It is also used to refer to children who grew up without the influence of human contact, such as those said to be raised by wild animals.

Adopted children or stepchildren may sometimes be observed as having this syndrome. They make up outrageous stories about how they were abused and/or abandoned by their adoptive mothers or stepmothers.

Named after a popular adventurous character created by Mark Twain.

This condition refers to the habitual neglect of responsibilities by children of superior intelligence because of parental disapproval and feelings of rejection; or the inability to adjust socially and psychologically of normal/bright children born to mentally impaired parents.

Named after the character from Oscar Wilde’s novel about a handsome young man who does not want to grow old.

This describes people who are overly critical of their own physical appearance despite the lack of any defects. They have difficulty dealing with ageing; and thus, try to cling to their youth by depending heavily on cosmetic procedures and products.

Named after the curious wandering character from Lewis Carroll’s most famous work.

This neurological disorder is a condition wherein a person suffers from visual image distortions, perceiving parts of their body or any other objects as having been altered in size. Though most closely linked with migraine, it is also a sign of epilepsy, mononucleosis and hallucinogenic drug consumption.

We hope you enjoyed this post on literary maladies.