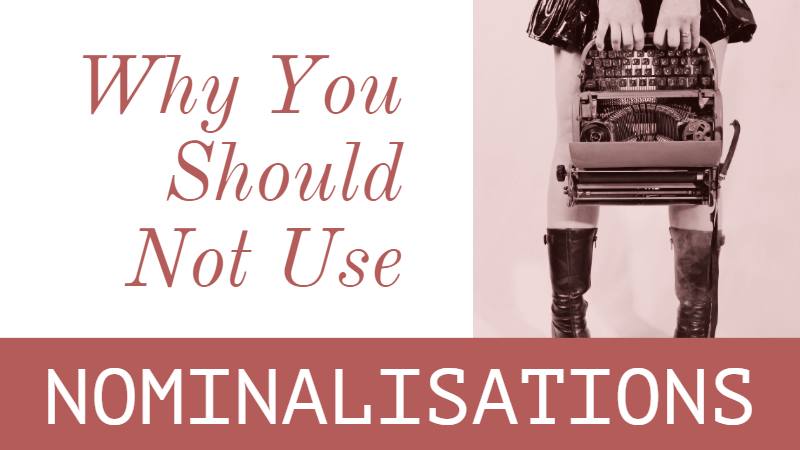 Why You Should Not Use Nominalisations When You Write

In this post, we explain why you should not use nominalisations when you write.

According to About Grammar, a nominalisation is a word formation in which a verb (or other part of speech) is used as (or transformed into) a noun. It is also called nouning. For example, ‘argument’ is a nominalisation of ‘argue’. They are often used in academic and corporate writing.

The endings of nominalisations vary, but most of them end in one of these: Why You Should Not Use Nominalisations When You Write

Why are they bad for your writing?

A nominalisation is a type of abstract noun. An abstract noun denotes an idea, quality, emotion, or state. It is something that is not concrete. It takes the power away from the original verb.

When we write in plain language, we try to avoid nominalisations, because they make sentences unclear. If we use them, we have to use more words in our sentences. They drain the life out of our writing.

In fact, nominalisations are often used in NLP (Neuro-Linguistic Programming) to induce a light trance. ‘If we use lots of nominalisations together, the mind is not sure exactly what is being said and so it drifts off and gets distracted…’ (source)

When they are used instead of verbs, it sounds as if nothing is happening in the sentence.

The distribution of the resources was set for inclusion in the discussion.
is weaker than
We discussed how we would distribute the resources.

The results from the gathering of the data were used for the formulation of questions.
is weaker than
We gathered data to formulate questions.

The implementation of the method allowed for the stoppage of waste.
is weaker than
The team implemented the method to stop the waste.

If you want people to pay attention to your writing, do not use too many nominalisations.