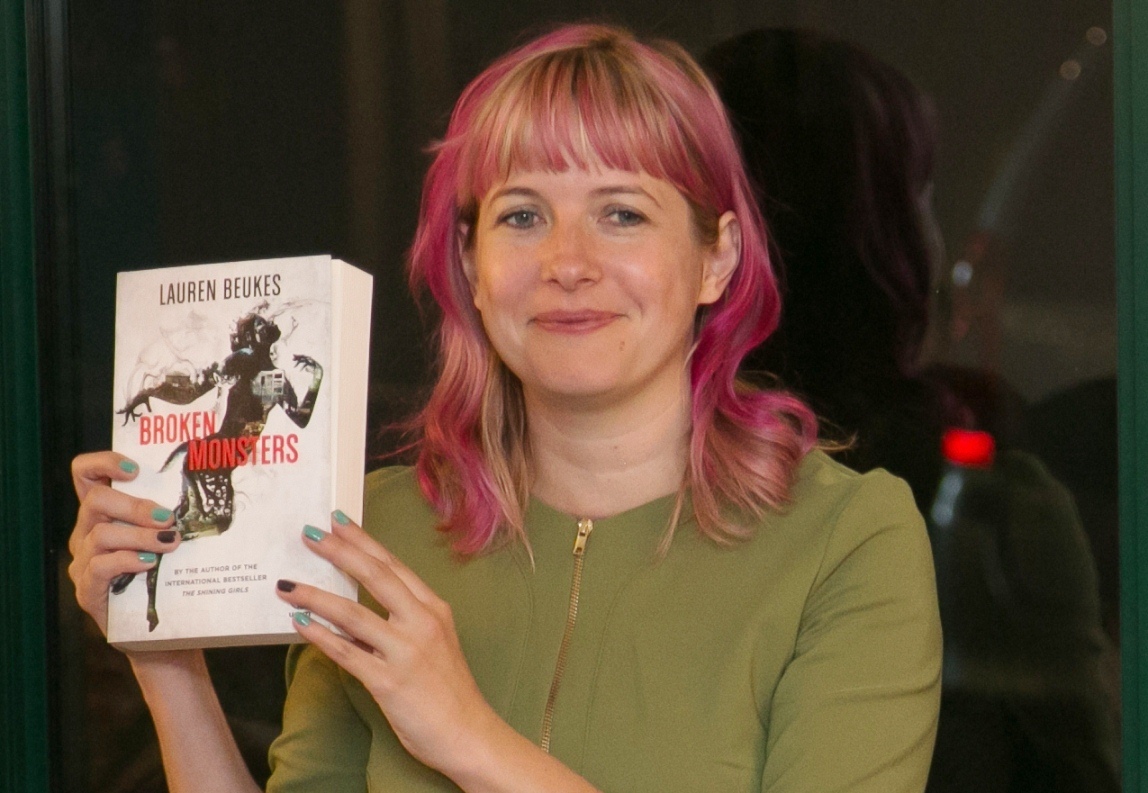 In this post, we share our interview with Lauren Beukes. The author was our guest at an event in Johannesburg, South Africa.

Lauren was in Johannesburg to promote her latest novel, Broken Monsters. She was charming and irreverent. She believes we should be promiscuous in our reading and try different genres and authors. One of her latest favourite finds has been Jennifer Egan. Her down-to-earth writing advice also inspired us.

As she says, ‘There’s no such thing as writer’s block. There is such a thing as a big lump of fear and procrastination and the way to get through it is to chip away at it. Or sneak around it when the block’s not looking.’ 1. Who is your favourite hero of fiction?
Halo Jones from The Ballad of Halo Jones, which is a science fiction comic strip written by Alan Moore and drawn by Ian Gibson. I read this when I was 12-years-old and I loved the story of an ordinary girl doing extraordinary things. It has great social commentary.

2. What is your most treasured possession?
My daughter’s toys, especially ‘Puppy’.

3. Which living person do you most dislike?
There are so many. Vladimir Putin, Jeremy Clarkson, the president of Uganda. Generally, just stupid people doing stupid things.

4. What is your greatest fear?
Failure.

5. Who or what has been the greatest love of your life?
My daughter.

6. What is your greatest regret?
That I did not finish my Bachelor Of Arts degree.

7. If you could choose to be a character in a book, who would it be?
Cace Pollard from Pattern Recognition by  William Gibson. Cace is a 32-year-old marketing consultant who has a psychological sensitivity to corporate symbols. 8. Which book have you read the most in your lifetime?
Probably a selection of my daughter’s favourite comics.

9. What is your favourite journey?
The 10 000 miles I travelled across North America in a VW Beetle in 1996 with my brother. We drove from San Diego to Vancouver to Toronto to New York. We avoided the mid-west and got stuck a lot. We even managed to get stuck in a little town called Hope. It was an incredible adventure.

10. What is your favourite quotation?
I don’t have any particular one.

11. Dogs or Cats? Which do you prefer?
Cats. Definitely. I have two.

12. What do you most value in a friend?
A sense of humour. Actually, more than that, irreverence.

13. What quality do you most admire in a woman?
The courage to pursue her dreams, and to kick back against society. 14. Which book that you’ve written is your favourite?
I wouldn’t tell any of my other children this, but I would have to say Zoo City. It is about Johannesburg and what it has meant to other people means a lot to me.

15. What are your favourite names?

16. What do you do as a hobby?
I read. I walk on the promenade. I enjoy dinner parties with friends. I want to get back into boxing. It helps keep me fit and grounded.

17. Which are your three favourite books?

18. Where do you get your greatest ideas for writing?
Everywhere. I pick up the stompies of life and I hoard them. In South Africa, we have a great expression, ‘picking up stompies’ (cigarette stubs) which means eavesdropping on snippets of a conversation and jumping to conclusions. I pick up a lot of stompies, from stuff I’ve read or seen or overheard or a news story or an advertising billboard or something half-glanced from the car windows – and I use that as a jumping off point. 19. What is your Writing Routine?
I avoid writing. I mess around on Twitter. I procrastinate. Then I feel sick that I haven’t done anything. I turn on App Freedom (the best $10 you’ll ever spend), which blocks me off from the Internet and I spend the afternoon writing. I write for two to three hours a day – more if I’m on deadline. I have an amazing nanny who looks after my daughter. I write every day.

20. What are your Top Five Writing Tips?

Follow this link for more photographs from the dinner with Lauren Beukes.