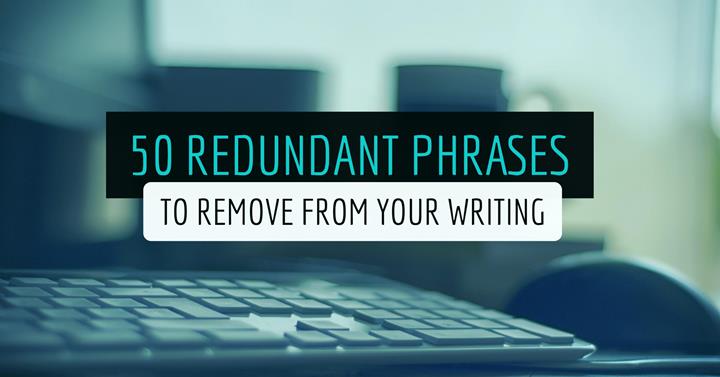 Writers Write is a business writing resource. In this post, we share 50 Redundant Phrases To Avoid by Mark Nichol

1. Absolutely certain or sure/essential/guaranteed: Someone who is certain or sure is already without doubt. Something that is essential is intrinsically absolute. A guarantee is by nature absolute (or should be). Abandon absolutely in such usage.

2. Actual experience/fact: An experience is something that occurred (unless otherwise indicated). A fact is something confirmed to have happened. Actual  is extraneous in these instances.

3. Add an additional: To add is to provide another of something. Additional is extraneous.

4. Added bonus: A bonus is an extra feature, so added is redundant.

5. Advance notice/planning/reservations/warning: Notices, planning, reservations, and warnings are all, by their nature, actions that occur before some event, so qualifying such terms with advance is superfluous.

6. As for example: As implies that an example is being provided, so omit for example.

7. Ask a question: To ask is to pose a question, so a questionis redundant.

8. At the present time: At present means “at this time,” so avoid the verbose version.

9. Basic fundamentals/essentials: Fundamentals and essentials are by their nature elementary, so remove basic from each phrase.

10. (Filled to) capacity: Something filled is done so to capacity, so describing something as filled to capacity is repetitive.

11. Came at a time when: When provides the necessary temporal reference to the action of coming; at a time is redundant.

13. Collaborate/join/meet/merge together: If you write of a group that collaborates or meets together, you imply that there’s another way to collect or confer. To speak of joining or merging together is, likewise, redundant.

14. Completely filled/finished/opposite: Something that is filled or finished is thoroughly so; completely is redundant. Something that is opposite isn’t necessarily diametrically opposed, especially in qualitative connotations, but the modifier is still extraneous.

17. Definite decision: Decisions may not be final, but when they are made, they are unequivocal and therefore definite, so one should not be described as a definite decision.

18. Difficult dilemma: A dilemma is by nature complicated, so omit difficult as a modifier.

19. Direct confrontation: A confrontation is a head-on conflict. Direct as a qualifier in this case is redundant.

20. End result: A result is something that occurs at the end, so omit end as a modifier of result.

22. Estimated at about/roughly: An estimate is an approximation. About and roughly are superfluous.

23. False pretence: A pretence is a deception, so false is redundant.

24. Few in number: Few refers to a small number; do not qualify few with the modifier in number.

25. Final outcome: An outcome is a result and is therefore intrinsically final.

26. First began, new beginning: A beginning is when something first occurs, so first and new are superfluous terms in these cases.

27. For a period/number of days: Days is plural, so a duration is implied; a period of or a number of is redundant. It’s better to specify the number of days or to generalize with “many.”

28. Foreign imports: Imports are products that originate in another country, so their foreign nature is implicit and the word foreign is redundant.

29. Forever and ever: Ever is an unnecessary reduplication of forever.

30. Free gift: A gift is by definition free (though cynics will dispute that definition), so free is extraneous.

31. Invited guests: Guests are intrinsically those who have an invitation, so invited is redundant.

32. Major breakthrough: A breakthrough is a significant progress in an effort. Though major is not directly redundant, the notable nature of the event is implicit.

34. Past history/record: A history is by definition a record of past occurrences, and a record is documentation of what has already happened. In both cases, past is redundant.

35. Plan ahead: To plan is to prepare for the future. Ahead is extraneous.

37. Postpone until later: To postpone is to delay. Later is superfluous.

38. Protest against: To protest is to communicate opposition. Against is redundant.

39. Repeat again: To repeat is to reiterate an action, so again is unnecessary.

40. Revert back: Something that reverts returns to an earlier state. Back is superfluous.

41. Same identical: Same and identical are just that (and that). Omit same as a qualifier for identical.

43. Spell out in detail: To spell out is to provide details, so in detail is repetitive.

44. Still remains: Something that remains is still in place. Still is redundant.

45. Suddenly exploded: An explosion is an immediate event. It cannot be any more sudden than it is.

46. Therapeutic treatment: Treatment in the sense of medical care is by nature therapeutic, so the adjective is redundant.

47. Unexpected surprise: No surprise is expected, so the modifier is extraneous.

48. Unintended mistake: A mistake is an inadvertently erroneous action. The lack of intention is implicit.

49. Usual custom: A custom is something routinely and repeatedly done or observed, and usual is redundant.

50. Written down: Something written has been taken down. Down is superfluous.

This article is from DailyWritingTips.com

If you want to improve your business writing, buy The Complete Grammar Workbook.