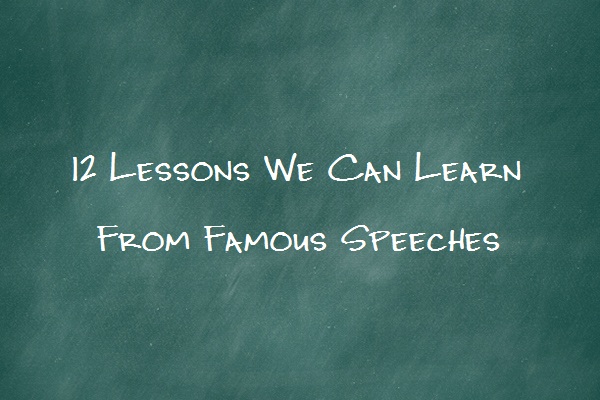 Last week I shared tips on delivering a speech. Today I am going to show you examples of brilliant speeches and why they work.

Speech Writing Part Four: Famous Speeches And Why They Work

Seven Techniques That Make You Remember A Speech

Look at this example of a speech to a group of students. (From the BBC) The highlighted sections show how the writer uses the techniques from the list above.

Fellow students (6), have you ever felt afraid to walk around the school by yourself? (1)

In a recent survey carried out by the school council, 70 per cent (7) of us have been bullied at some time in our life at school.

The bullies are vicious, violent, and vindictive (3). Unfortunately, they are getting away with it. (5) Can this be fair? (1)

The bullies terrify other students, and yet they are cowards (4) themselves. If we pull together we can fight this fear. Join me and fight this fear (2) today.

Take the list of seven techniques and see how many have been used in speeches you remember. Include them when you are writing a speech. They work. Great speeches share some similarities. They are part of a process that changes a company’s direction, shows the leadership potential of a personality, or forms a nation’s destiny.

Excerpt from Martin Luther King’s ‘I have a dream’ speech

Watch out for next week’s post, Part Five: A Speech Writer’s Checklist

If you need to write speeches, you should attend this course: Can I Change Your Mind?