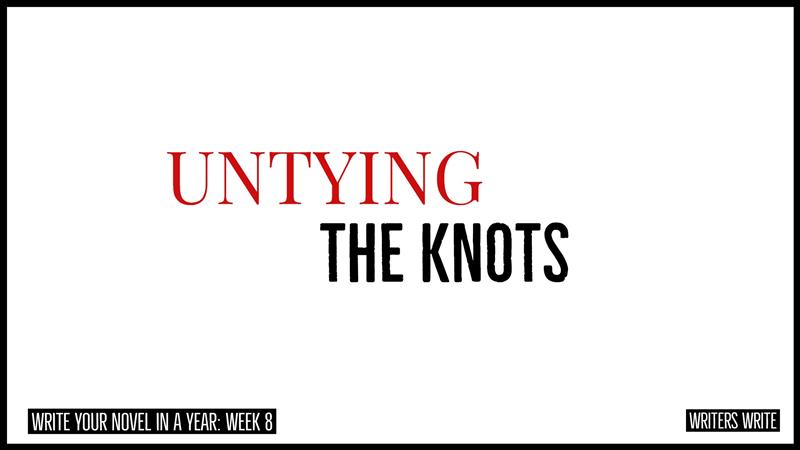 Writers Write creates writing resources. This post is about untying the knots in your book so that you can create the perfect ending.

Welcome to week 8 of Anthony Ehlers’s series that aims to help you write a novel in a year. Read last week’s post here.

This week we’re looking at making the ending in your synopsis more exciting.

From big showdowns to ‘bumps’

The big moment you should be looking for is the ‘showdown’ between the protagonist and antagonist. The final test, the climax. It’s about tightening the tension to the point where you can’t squeeze any more from the story. Then releasing that tension, for your characters and the reader.

Is there a moment where your main character comes face to face with his or her tormentor? Who wins? Who loses? How does this happen? Where will it take place? This should be the strongest scene in your book. In the crime thriller, The Equalizer, the vigilante McCall has a showdown with Nicolai, the hired hit man, in a deserted Home Mart store at night.  An unusual setting — but one that worked well.

After the climax, you start to show the outcome for your characters. Some people call this tying up the loose ends. But if you look at the origins of the French word denouement — which means untying — it’s really about making sure you’ve unravelled all the ‘knots’ you’ve created in your plot.  For every conflict you’ve set up, there should be a resolution.

In my novel, the climax brings together all the major players in the story. It ticks the right box at the right moment in the story. But I didn’t want to give the reader just the expected and inevitable moment — so I added a ‘bump.’

This is a scene, near the end of the novel, where your lead has to face a last obstacle. This challenge usually comes out of nowhere and blindsides your main character. In my story, Jenna, my heroine, comes up against one final challenge — a final ‘knot’ before I could end the story.

Because my novel is a thriller, I knew I had to create some twists and in the plot. Keep in mind: other genres also have these surprises. A family drama, like August: Osage County, has just as many ‘gasp moments’ as any crime story.

To do this, I realised, you sometimes have to give characters masks. Not Batman or Zorro masks — although if that suits your story, why not? — but personas that hide a character’s true role in the story.

The tricky part, for us as writers, is making sure we don’t confuse the mask the character wears with their function in the story.  Let’s take that best friend as a scenario. If you know that the best friend is actually the antagonist in the story, you have to make sure he wears the mask of friendship convincingly — and you have to make sure that, when his true function is revealed as the antagonist, you do it just as convincingly. What was his true motivation? Why is he a craven coward?

It’s also time this week to reflect on what we’ve achieved this far in our journey.

At this point, you should have a detailed working synopsis, which covers the beginning, the broad swathe of the middle, and the end of your novel. You’ll also have character descriptions and some of your initial research done and dusted. Perhaps you’ve even decided on your theme.

This is your chance to look at these elements. Try to  identify any gaps or holes in your plot, character, setting, and theme.

In my synopsis, I realised that I jumped too quickly from the set-up to the middle of my story. The first major plot point had to mark the end of one ‘world’ — where Jenna and Matt are safe as a couple — and the start of a ‘new world’ — where they are in danger. What would signify that they were being stalked? This had to be a strong scene and it was missing.

There may be a few things you have to add into your synopsis or character sheets, but don’t obsess about getting it perfect. It just has to be ‘workable’.

‘I usually begin with endings, with a sense of aftermath, of dust settling.’ — John Irving

Look out for next week’s instalment of Write Your Novel In A Year! Week 9: The Building Blocks Of Your Novel

Explore: Anthony Ehlers, Endings, Write Your Novel In A Year