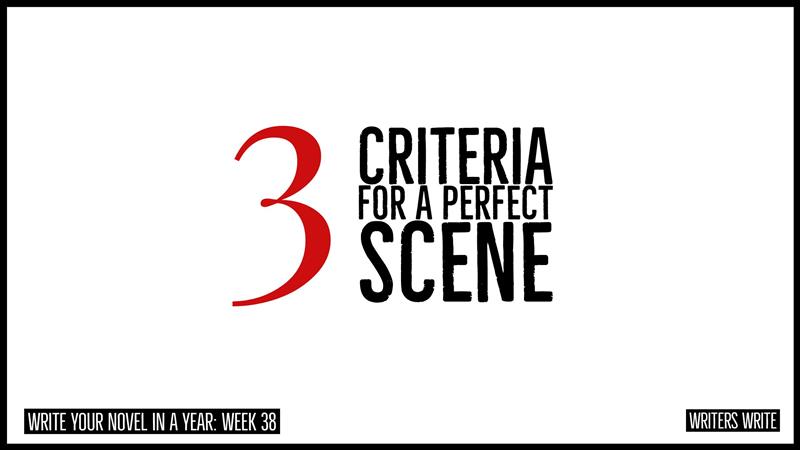 Write Your Novel In A Year – Week 38: 3 Criteria For A Perfect Scene

Writers Write creates and shares resources for writers. This post is about the three criteria you need to include if you want to write a perfect scene.

Welcome to week 38 of Anthony’s series that aims to help you write a novel in a year. Read last week’s post here.

Now that we’re adding scenes, let’s look at the criteria for writing a perfect scene.

3 Criteria For A Perfect Scene

1. A scene is perfect … when you get lost in it

When you’ve finishing writing a scene in your novel, you should read it again. But this time as a reader – not a writer. Read it for flow, for how it engages your senses, your imagination, and your interest – from start to finish. It must have its own mesmerising power.

I was reading Fitzgerald’s exquisite short story ‘Winter Dreams’  last night – the opening scene of an abrupt end to winter just sucks you in as a reader. The images of the ‘ragged sparrows’ and ‘crusted ice’ stir the senses. The ‘red and black balls’ the golfers use on the white snow are so unusual and vivid; you can almost see it as a movie.

There is such confidence and style in this opening that you blindly follow this amazing writer into the story. You trust the narrator – you believe the viewpoint. You know that he’s going to take you into a new world, show you something you haven’t seen before. Stilted writing – or a writer who isn’t sure of his material – can break the flow of a scene.

In great scenes there’s a rhythm to the writing that doesn’t interrupt – it soothes and seduces, or shocks and captivates, but it doesn’t break. The tension – the single, invisible cord that holds the scene together from the opening to the end – is like a high wire in a circus. You watch the acrobat or character cross it with a sense of breathlessness, wonder, fear.

A great scene is one that you get lost in – but never confused with as a reader.  You may be asking questions about what’s happening in the scene, or anticipating its hidden mysteries, but you’re not left scratching your head.

Be careful always not to repeat information or ‘over egg’ your scene. In screenwriting we call this ‘repeating a beat’ – it’s the kiss of death in writing. Be compelling and radiant when introducing a new plot point and the reader or viewer will get it. It will register with them. It will stay, stick, resonate.

So … a perfect scene is mesmeric.

2. A scene is perfect … when it feels natural

In the series, Mad Men, there’s a scene where Don Draper, a square-jawed serial womaniser, and his beautiful wife, Betty, a cool but insecure blonde, attend a party – they’re the perfect couple. They’ve arrived at the party in Don’s brand new Cadillac.

At the party, a blunt shock comic and TV star, Jimmy, reveals to Betty that he knows Don had an affair with his wife – this revelation shatters Betty’s world.

One of the great things about Mad Men is its understated, elegant pacing and storytelling. It exposes its themes and surprises in a detached, restrained way – and eschews the obvious. So we’re wondering: Will Betty confront Dan?

Instead of a screaming match, we see a quiet scene in the new car as Don and Betty travel home. With an abruptness that shocks the viewer, Betty suddenly pukes up her champagne and canapés all over the pristine interior of her husband’s prized car. And the episode ends.

It’s the most natural ending to the scene – everything is spoiled for this couple, nothing is perfect. The revelation of his infidelity is literally sickening.

So … a perfect scene has inevitability.

3. A scene is perfect when … you can’t wait to read the next scene (and the next!)

As readers, we’ve experienced those novels that kept us up night. I remember reading Sidney Sheldon or a Harry Potter novel, thinking, ‘Just one more chapter and then I’ll turn off the light … OK, just one more ...’ When you look again, it’s two in the morning.

As writers, we must become that legendary queen and storyteller, Scheherazade from One Thousand and One Nights, who had to tell a new story every night – and an even more exciting story – in order to save her life. Her life depended on captivating the king and holding his imagination for another twenty-four hours.

It’s important to create a compelling and extraordinary world that hinges on a single and believable situation for your characters.  It must be a web and not a sieve: the story feeds itself; it doesn’t allow it to run out.

Dan Brown’s Da Vinci Code, for example, doesn’t only build a murder mystery, but builds a shadowy world of the Opus Dei and conspiracy, one that throws a big question over Christian history – no matter how far-fetched. He holds us in the world in each and every scene. The same can be said of Psycho and the world of the Bates Hotel.

If you can’t wait to write the next scene, you can be sure your reader won’t be able to wait to read it.

So … a perfect scene is … addictive.

‘There is no terror in the bang, only in the anticipation of it.’ — Alfred Hitchcock