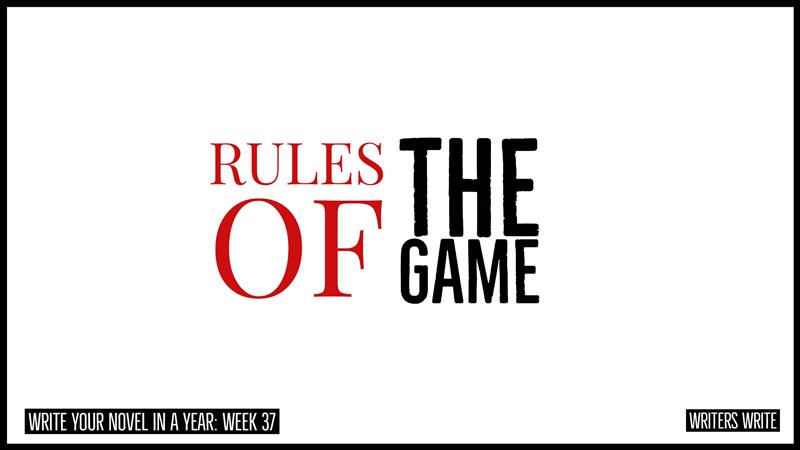 This post is about establishing the rules of the fictional world you’ve created in your novel.

Welcome to week 37 of Anthony’s series that aims to help you write a novel in a year. Read last week’s post here.

What are the rules of your particular fictional world?

In Chuck Palahniuk’s hypnotic thriller, Fight Club, the secret underground world of white-collar boxing is the invention of the disturbed Tyler Durden. There are other rules: only two men per fight, only one fight at a time, and so forth.

When your story or your plot operates outside of the conventional or the ‘real world’, you have to establish the ‘rules of the game’ and you have to let the reader or audience know what these are.

In the movie Ted, for example, Jon Bennett’s childhood teddy bear magically comes alive on Christmas morning – and turns into a minor celebrity and, eventually, a foul-mouthed slacker.

Here the rules of a ‘living’ teddy are given to the viewer early on. Ted can do pretty much everything we can do – talk, drive a car, Tweet, smoke drugs, have sex with his girlfriend. Every character in the story can interact with Ted.  He is a reliable character in the story. There’s no way we ever believe he is the product of Jon’s imagination. Without setting out the rules of the game, the audience may have been suspicious of this character.

In the 1950s film, Harvey, for example, the main character’s best friend is a mischievous six-foot tall rabbit called Harvey – and Harvey is invisible.

Since Elwood, an eccentric and alcoholic, is the only one who can see Harvey, his friends and family wonder if the rabbit is a product of too much drinking or even mental illness.  This creates a completely different dynamic in the film.

If you’re writing in the genres of fantasy, science fiction, paranormal, and horror, you need to explain or show the rules of the game. For example, your vampire can come out in daylight and sparkle – Twilight.  Or ‘don’t get them wet, don’t feed them after midnight’ – for the comedy horror Gremlins.  Can you think of other examples?

The rules for three

I was faced with some tricky questions this week. Does my couple have an open relationship? Do they hook up with people separately or do they, as the saying goes, only play together? How is the instigator in this behaviour? Is it something they both want?

There has to be a code when it comes to this kind of behaviour. This is exciting for me as a writer, as it delves into sexual politics and behaviour. Thinking of Fight Club, they could have firm rules: no past hook-ups, no friends, no repeats, no drug addicts, and so forth.

There could even be subtle code words or gestures that Jenna and Matt could use to communicate during the encounter.  While it’s important for me, as a writer, to understand the underlying psychology of their relationship, I also need the ‘device’, the rules of the game, to give the story some structure and clarity.

While facilitating Writers Write 2  – which is all about plotting – I was discussing the importance of stories having their own ‘internal logic’ and this dovetails with the idea of the rules of the game.

When creating a fictional universe, it’s important to set the ground rules of for the worlds in which your story plays out. It doesn’t matter how bizarre of far-fetched, your story will be reliable if it follows its own internal logic and is self-consistent. This logic – if the reader trusts it and believes it – will allow for the suspension of disbelief. You make things up, but they have to be believable.

Spend a half hour or hour a day writing your scenes or chapters.

‘I’m influenced by the internal logic of the story, the page leaps, and dream leaps I can make while writing.’ — Lincoln Michel