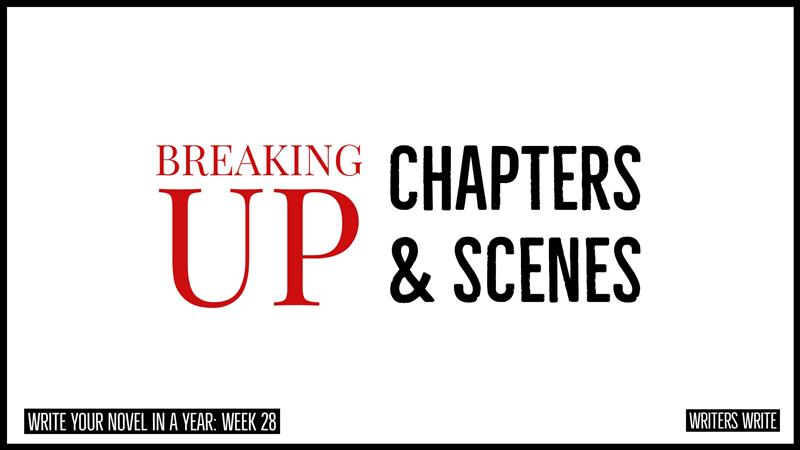 Writers Write creates writing resources. In this post, we talk about breaking up chapters and scenes in your novels.

Welcome to week 28 of Anthony’s series that aims to help you write a novel in a year. Read last week’s post here.

‘Breaking up is never easy I know…’

So says the famous Abba song, ‘Knowing Me, Knowing You’. How do you know when to end a scene, chapter, or section of your novel? These are your basic units of writing – and it’s what makes the task of writing more manageable.  It also gives a place for the reader to rest and take a breath. It makes the novel less intimidating to read. Both are good reasons to use these breaks.

Generally, longer novels are divided into parts or sections to create breaks in the narrative.  You can group these parts to signal a change in time, place, or characters. Typically, we arrive at these ‘pause points’ quite naturally in our writing.

For shorter novels, however, you don’t really need to break up the book into parts or sections. In my novel, for example, I’ve decided to forgo section breaks. One, I think it could affect the pace and dilute the tension of the narrative. Two, there’s no good reason to break it up – there’s no big shift in time, setting, or character.  So what I’m saying is: don’t use them just to be fancy ‘bookmarks’. Keep it simple and clean.

Don’t turn a cliff-hanger into a yawning chasm …

If we look at the most basic unit of writing – the scene – we know that it must have three elements.

While I won’t argue that the cliff-hanger method is an effective method of writing, you can take it too far. Eventually the reader will see through this write-by-numbers approach. They’re wise to your tricks. They’ll yawn and close your book, turn off the light, go to sleep.

Let’s face it. Sometimes your character does get what they want – and you then develop a new conflict in the next scene. Or they only get a partial resolution. What also works is something I call the ‘double whammy’.

In one scene in my book, things take an unexpected turn when Jenna, my heroine, goes into a hotel room that’s booked for models and stylists to use on a photo shoot.  She’s alone in the room when Monty, the young man obsessed with her and Matt, comes out of the bathroom. It would have been a great place to end the chapter on a high note, but I let it play out. She doesn’t want to be alone with him and starts to have a nervous conversation with him – hoping someone from the shoot will walk in. Then, just as she thinks she has a chance to bolt, Monty does something really unexpected. He collapses on the edge of the bed and starts sobbing. What will she do now?

Sometimes you can just give your story a little bit of breathing space to cool off. In one scene in my novel, Jenna hasn’t resolved a conflict with her boyfriend, Matt. They’re in bed – and she lies in the darkness, alone with her confused thoughts. Their cat, Jago, silently jumps onto the bed and sits on the edge of the bed, looking at her.  It’s a quiet way to end the scene – but I feel it works well. The inscrutable gaze of the cat adds an unnerving element to the scene.

One of the most obvious reasons for starting a new scene or chapter is to allow you to change viewpoint from one character to another. If you have two duelling protagonists or even a love story, you could move from the first character to the second character in alternate chapters – what’s sometimes called the ‘windscreen wiper method.’  This method could’ve worked for my novel, but I didn’t want Jenna and Matt to be equally weighted. I also wasn’t writing a love story – but rather a thriller.

In a thriller or mystery, you may only want to reveal the identity of the ‘baddie’ right at the end – and so to give the killer or criminal viewpoint scenes or chapters throughout the book may dissipate the tension. One way to get around that is to use first or second person techniques – getting inside the head of the killer or criminal without disclosing their name.

For the most part, your novel should give most of the ‘airtime’ to your main character – so it makes sense that in my novel, Jenna should be the viewpoint ‘anchor’ for most chapters. However, when it’s necessary, I can have scene breaks in the chapter to go to the viewpoint of her boyfriend, sister, and so forth.

In the early parts of my novel, we see Jenna’s world and her predicament pretty much through her eyes and emotions. However, as I start to reveal more secrets and complications, I widen that viewpoint. I introduce Matt as a viewpoint character only after the night they spend with Monty – to finally expose his vulnerability. And I only bring in the antagonist as a viewpoint character at a time when it’s critical for the reader to know his intentions and desires.

So what I’m saying is that these viewpoint markers or breaks can be used to create tension and surprise as much as your typical cliff-hanger techniques. Ask yourself: At which point would it benefit my story the most to get inside the mind of another character?

‘A pause; it endured horribly.’ — F. Scott Fitzgerald in The Great Gatsby