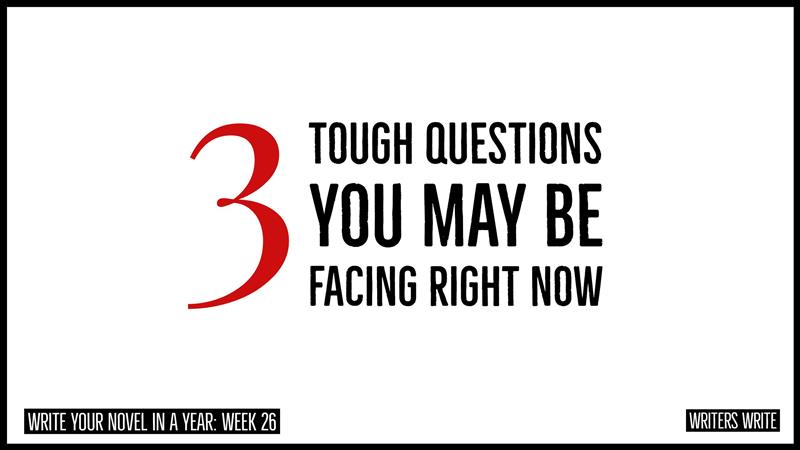 Write Your Novel In A Year – Week 26: 3 Tough Questions You May Be Facing

In this post, we look at three tough questions you may be facing in the novel-writing process.

Welcome to week 26 of Anthony’s series that aims to help you write a novel in a year. Read last week’s post here.

What if your story just isn’t working?

This may seem like a crisis. It may make you feel like you’re a failure. You’re halfway through your novel and you can hear the knocks in the engine.  The truth is that it happens to a lot of writers – writers on their third or fourth book, even writers who’ve written bestsellers.  It’s part of the process.

As you write your first draft, you come up against unforeseen gaps in your manuscript or uncover new opportunities to explore — it happens even if you’ve written out a detailed synopsis.

The problem is I can’t see the ‘whole picture’ in my mind yet. This is never easy when you’re in the midst of first draft panic. What I could do to make it clearer in my mind is to refine this premise line and make it more specific. Who is my most pro-active character? Who is driving the story? What is at stake? How can I give a clue of the ending? This is my task this week.

I think some self-doubt and fear is natural. It’s worth interrogating and evaluating your story at any point – if it’s going to make it better. But don’t let it hold you back. This isn’t the time for censorship – give that engine more throttle and push on over the hill.

What if your plot isn’t working?

A great story idea or premise is one thing – but how do you deliver on it? There’s a two-punch approach to solving your plot dilemma. The first is to evaluate your genre. Are you writing a mystery? A romance or love story? Your genre will dictate what kind of plot points you’ll need to develop.

The second approach is to have a cold-eyed look at your first major plot point, the one that devolves from your inciting moment. The scene that turns a spark into a blazing fire.

It is typically an action scene that reveals the major complication of the story.  In my story, the inciting moment is when Matt and Jenna invite Monty home with them. When they reject him, he takes his first dramatic step to try and re-establish that intimacy.  I’m not sure my scene is powerful enough to convey his intent and establish that my main characters are now in crisis.

If you can unlock this first plot point, and push your way through it, the dam wall of writer’s block will break – and the rest of the plot will probably flow.

What if your characters aren’t working?

This is probably the biggest thorn in my side at the moment. It’s the one element of my novel I probably have the least confidence in.  One way I could get over it is to sandpaper the rough edges on my characters. When we’re planning our characters, we tend to be very specific. This one’s the hero … and this one’s the villain.

It’s OK to shade your characters a bit – in fact, it will make them more interesting and believable. There’s a bit of the villain in the hero, and a bit of the hero in the villain. For example, Jenna’s boyfriend Matt is emerging as a complex character – and I’m not allowing him to be more volatile, moody, or secretive. This is because I didn’t think it fitted my initial idea of Matt and Jenna as the perfect cardboard cut-out lovers. But why not let him run loose and see what happens?

Even when it comes to my antagonist, Monty, I can cushion his ‘evil’. I want the reader to feel some empathy for him – to see him as a dreamer whose dreams turned dangerous.

Jenna is my lead character and the one I want the reads to relate to the most – but she could also be a bit more complex. She has to be pro-active, strong, and she has to have a firm goal she wants to pursue. Right now, she doesn’t have that.

‘You have to decide a direction to go, and you have to move forward in that direction amidst a sea of second guessing.’ — Donald Miller