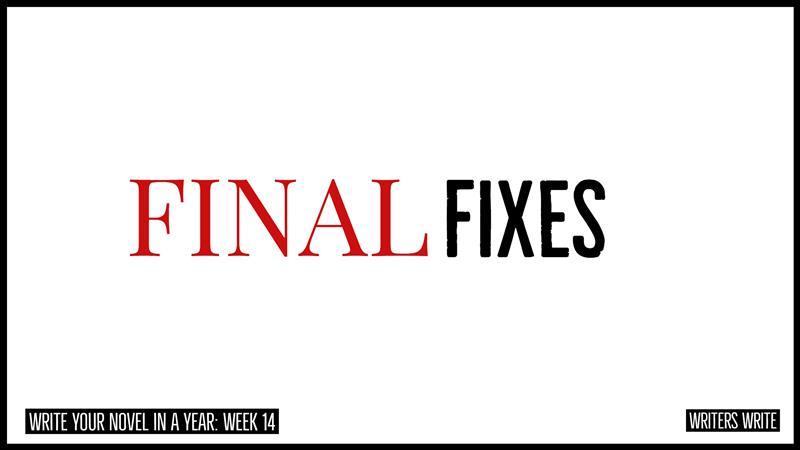 Write Your Novel In A Year – Week 14: Final Fixes

Writers Write is a comprehensive writing resource. In this post, we talk about the final fixes we need to make to character, plot, and setting for our works in progress.

Welcome to week 14 of Anthony’s series that aims to help you write a novel in a year. Read last week’s post here.

Recapping – Where are we now?

This week we reach another ‘Yay’ moment as we wrap up our scene or chapter outlines. But maybe that ‘Yay’ isn’t as loud or as enthusiastic as the first one, because you’ve been working slavishly on your book and you appreciate just how hard this task is. It is hard — but keep going.

Let’s recap what we have so far:

For this last one, if you’re working on an average length novel of 80,000 words, you should have brief thumbnails of:

Don’t panic if you haven’t finished your outlines. You can always play catch-up when you have a few hours — between midnight and three in the morning, or when you’ve forgotten to pick the kids up at school again this week.

Hopefully, what this process has shown you is how important it is to orchestrate the different elements of your novel — from the plot to the characters, the theme to the timeline. For me, it’s given me a framework. I don’t feel like I’m dealing with something nebulous but something that looks, feels, and smells like a real novel. And that’s exciting, isn’t it?

I’ve got a great coffee table book, a tie-in to the TV series Desperate Housewives, by Marc Cherry. It’s a glossy book called Behind Closed Doors.

There is a chapter dedicated to each of the housewives, with a shorthand description of their characters. For example, Susan is described as ‘The Calamity Jane of Wisteria Lane’; Lynette is described as ‘A go-getter whose life took an unexpected turn.’ I think these are wonderful ways to cut straight to the heart of a character rather than generic descriptions.

In a short story I wrote years ago, Dinner Theatre, I wrote about a petite blonde character — ‘The label read “Fragile” but the contents were unbreakable.’ This was to show the toughness under her deceivingly demure demeanour.

For my new novel, I’ve developed Matt, one of my main characters, as able to go ‘from a rough-salted tattooed surfer to intellectual hipster with a pair of black-framed specs and skinny chinos’.  It just helps me see him more clearly in my mind. He’s one of my favourite characters but he’s difficult to pin down.

For Jenna, my heroine, I think of her as ‘Daddy’s Princess rebelling with a Bad Boy’. It’s not perfect, but I think it brings her personality into focus in my mind.

Fix as you go

One thing you need to do is not panic. You may feel overwhelmed if you haven’t achieved all the weekly milestones. The only way you’ll catch up is if you work calmly towards a realistic goal.
From next week onwards, we’re going to be starting the actual writing of the novel. If you’re lagging behind here are some quick fixes.

For the rest, you can always fix as you go, adding in other scenes, or doing ad-hoc research on the other elements we’ve discussed in these blog posts.

‘Too many people spend too much time trying to perfect something before they actually do it. Instead of waiting for perfection, run with what you’ve got, and fix as you go.’ — Paul Arden.