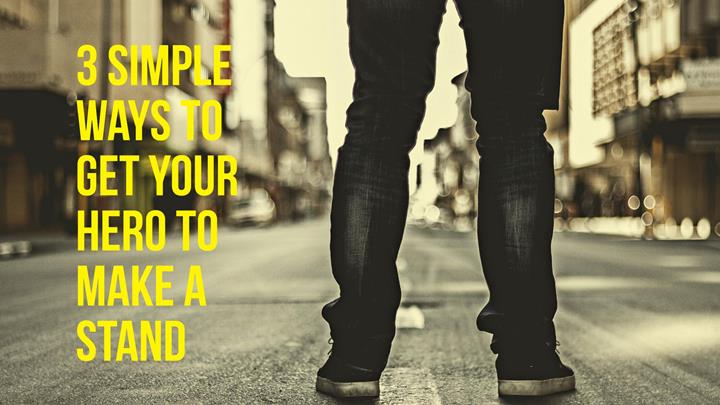 In this post, we will write about three ways to get your hero to make a stand.

‘The place where you made your stand never mattered. Only that you were there…and still on your feet.’ ~Stephen King

We don’t want to read books about eternal cowards, characters who avoid problems, and people who never learn to fight back.

As a reader, I am not looking for Superman in every character, but I do want characters to find that extraordinary something they never knew they had, or to admit that they will never have it. I want them to make a stand. If they don’t, I feel as if I am watching a tacky reality television show where nothing changes.

But how do novelists get characters to make this stand? If you are struggling to get your characters to show their true colours, here are three ways to force your hero to act:

Use an antagonist who will not wait for things to happen. They will force your protagonist to fight or surrender. They could do this physically, or they could manipulate the protagonist into a situation where they are forced to make a choice. This adversary will block escape routes and remove your hero’s lifelines. The villain could threaten the protagonist’s life, or the life of someone they care about. They could spread rumours and tell lies about the hero and force them to lose a spouse, a home, or a job.

Put your protagonist in a setting where they are forced to confront the antagonist. This is also a great way to introduce setting without boring your reader. If you make the environment part of the problem, it becomes easier to describe it. You can place them in a social setting, like the protagonist’s daughter’s wedding, where it is not easy for them to walk out. You can literally let the antagonist lock them up somewhere, or you can place the adversaries on a train or a plane.

Give your protagonist a time where he or she has to do something or face terrible consequences. This technique allows you to force a result. There is no more time to think or plan. He or she has to react and fight back, or lose.

It does not have to be a melodramatic deadline, such as saving the world. They may have to get to the airport by midnight because a long-lost son is leaving town for good. Do they have the courage to finally tell him that they love him? They may have to be at work by 8 a.m. or lose their job. Will they show responsibility, or do they finally have the courage to leave a hated job?

If you show me that your character has backbone, and that they are prepared to fight, I will probably enjoy your book. If you can show me how they change and grow as a person, I will like it even more. Even if they try and fail, I will know that there was something worthwhile in them. As Stephen King says, ‘No one can tell what goes on in between the person you were and the person you become. No one can chart that blue and lonely section of hell. There are no maps of the change. You just come out the other side. Or you don’t.’

Show me that journey. Let your character make a stand. If you liked this article, you may also enjoy: