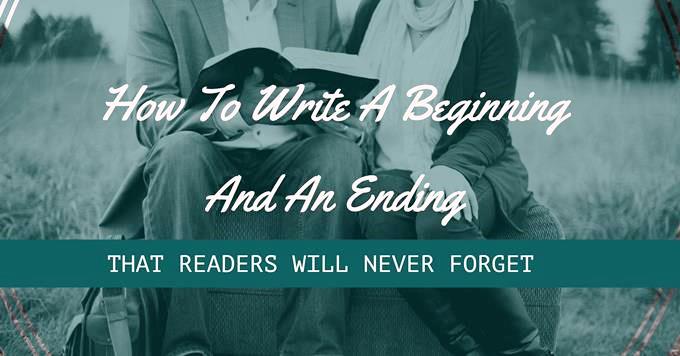 We remember beginnings and endings. In this post, we show you how to write a beginning and an ending that readers will never forget.

Billy Collins, former Poet Laureate of the United States, says, ‘The first line is the DNA of the poem; the rest of the poem is constructed out of that first line. A lot of it has to do with tone because tone is the key signature for the poem.’

The same is true for your novel. The first lines are a promise to your reader. They set the tone for your book. Will it be lyrical, crisp, caustic, humorous, or business-like? They also allow readers to create a picture of the coming story in their minds.

Your final sentences should resonate with that promise. They should echo the tone and the images from the beginning in some way. They should show change, woven with words, moods and senses that answer the promise.

When I teach Writers Write, I always use this exercise:

How does this work?

“The Santa Anas blew in hot from the desert, shrivelling the last of the spring grass into whiskers of pale straw. Only the oleanders thrived, their delicate poisonous blooms, their dagger green leaves. We could not sleep in the hot dry night, my mother and I. I woke up at midnight to find her bed empty, I climbed to the roof and easily spotted her blond hair like a white flame in the light of the three-quarter moon.”

“In the dark palm print, I could see the blurred image, but also my mother’s face shimmering on a rooftop over an unknowable city, talking to the three-quarter moon. I wanted to hear what she was saying, I wanted to smell that burnt midnight again, I wanted to feel that wind. It was a secret wanting, like a song I couldn’t stop humming, or loving someone I could never have. No matter where I went, my compass pointed west. I would always know what time it was in California.”

The lesson?  Can you see how the ‘three-quarter moon’, the ‘rooftop’, ‘midnight’, ‘my mother’ echo the beginning. The tone is sad – wistful and restless in the beginning, wistful and wiser in the end.

“When I wake up, the other side of the bed is cold. My fingers stretch out, seeking Prim’s warmth but finding only the rough canvas cover of the mattress. She must have had bad dreams and climbed in with our mother. Of course, she did. This is the day of the reaping.”

“Out of the corner of my eye, I see Peeta extend his hand. I look at him, unsure. ‘One more time? For the audience?’ He says. His voice isn’t angry. It’s hollow, which is worse. Already the boy with the bread is slipping away from me.
I take his hand, holding on tightly, preparing for the cameras, and dreading the moment when I will finally have to let go.”

The lesson? Can you see the repetition of Katniss reaching out? Her fingers? His hand? The ‘cold’ in the beginning echoes with the ‘hollow’ at the end. The tone is bleak, matter of fact, and loaded in the beginning; bleak, less clipped, and sad at the end.

This is a powerful writing tool. It does not matter if the ending is happy or sad, if there is a resolution or not. The power is in the echo – in the images being reinforced. Even if the readers are unaware of what you have done, they will feel as if the story circle is complete.