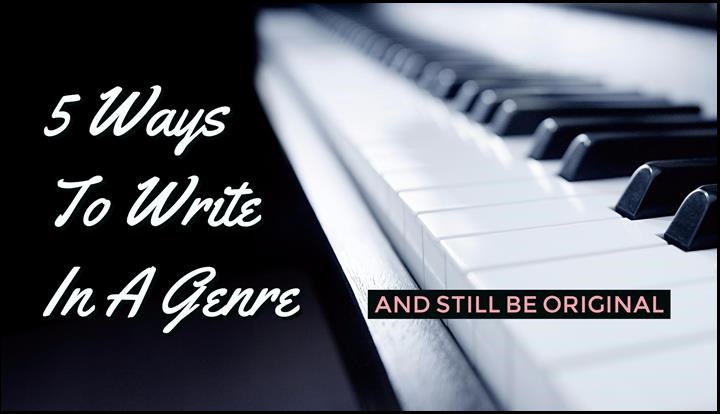 5 Ways To Write In A Genre And Still Be Original

In this post, we discuss ways to write in a genre and remain original.

If you don’t want to write to genre, and if you don’t believe in it, please feel free to stop reading now.

There are definite benefits to writing in a specific genre. Readers and publishers like knowing what to expect from a book. But one of the most common complaints about genre is that the book is too similar to this or too similar to that.

This makes it hard for us as writers, especially in the beginning. We want to be original, but we must still fulfil the promise of genre and write something that suits. It’s a fine line and not always easy.

I recently read The Power of Habit by Charles Duhigg. It is a fascinating book that examines the habits of individuals, companies and societies. I seriously recommend you read it. The book discusses behaviour and how to change or manipulate our habits.

One of the examples he uses, comes from music and tells us about how radio stations and music companies try to predict hit songs.

But what does that have to do with genre?

If you look at hit songs, they must comply with the requirements of that genre. Consider the biggest bands in any genre, look at how their songs emulate what is expected of the genre and then look at where they broke the rules.

But to come back to the book, Charles Duhigg uses the example of a company called Polyphonic. This company developed a program called ‘Hit Song Science’. It analysed statistics and used algorithms to predict whether a song would be a hit.

The song Hey-Ya by Outkast was expected to be a huge hit, according to this program. It ticked all the required boxes, but when the song was first played it did not do as well as expected. In fact, almost half the listeners changed the station when the song came on.

It was considered too different, not genre specific-enough. So now what? The program had never let them down before. They decided to ‘sandwich’ the song. Each time it aired they played a really popular song before and after it. Listeners did not change the station and they got used to the song. Eventually Hey-Ya reached the top of charts and achieved the predicted success. Interesting, right?

So now back to writing. We need to give readers enough of the familiar to tick the boxes of genre, but then we need to add new developments and dimensions to our stories.

Here are five tips to help you:

Don’t try to change every single thing. Remain true to the genre, but true to yourself and your writing.

TOP TIP: If you want to learn how to write a book, sign up for our online course or join our Writers Write course in Johannesburg.