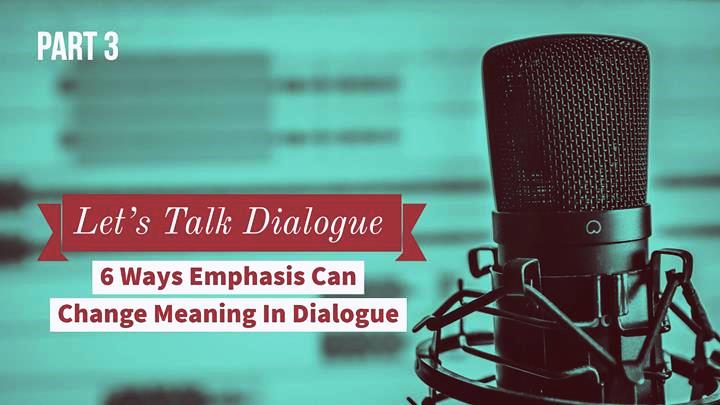 Most of us don’t speak in a continuous monotone. Even newsreaders have a slight lilt in their delivery. Nobody knows the value of a well-placed emphasis better than a teenage girl. (‘Oh, that’s sooo embarrassing!’). Did you notice how the italics were showing the emphasis there?

OK, let’s imagine a group of girls at a party. Everything’s going well – the DJ’s playing One Direction, the boys are acting cool, the girls are dressed like the cast of Gossip Girl – when Tanya storms up to a girl named Chloe.
‘Did you say Keri slept with my boyfriend?’ Tanya demanded.

OMG! How does Chloe respond? What meaning do you want to stress in your dialogue?

Let’s look at how an emphasis in italics affects the way we understand the dialogue – it even changes the possible meaning of Chloe’s response.

‘I never said she slept with your boyfriend,’ Chloe said.
Meaning: How dare you accuse me of something like that?

‘I never said she slept with your boyfriend,’ Chloe said.
Meaning: Someone else slept with him.

‘I never said she slept with your boyfriend,’ Chloe said.
Meaning: She maybe just fooled around with him.

When else do we use italics in dialogue or in the narrative?

Brands and the Bible

Of course, there’s always an exception to the rule. We don’t use italics or quote marks for most computer terms, brands or the Bible. Example: Timmy was eating Weetabix for breakfast. Or: David had to upgrade to a new version of Microsoft Windows.

If you want to know more about dialogue, you will love:

Top Tip: Join us for Writers Write ONLINE to learn how to write a book.