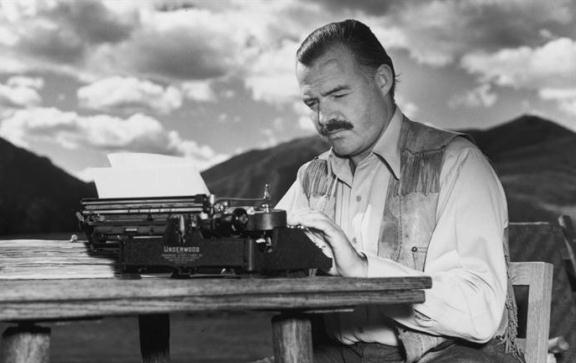 Writers Write creates and shares writing resources. This post is about how Ernest Hemingway changed the writing landscape.

One of the greats

Ernest Hemingway, born 21 July 1899, was one of the great American novelists of the 20th century. From the 1920s to the 1950s, he produced seven novels, six short story collections, and two non-fiction works. He won the Pulitzer Prize in 1952 and the Nobel Prize in Literature in 1954.

His life was an adventurous, but chequered one. He was an ambulance driver on the Italian front during World War 1 and was present at the D-Day landings in Normandy in World War 2.

He married four times and divorced three times. He was a functioning alcoholic all his life. After struggling with depression in later years, he committed suicide just as his father had, on 2 July 1961. The inspiration for his first novel came while living in Paris as a foreign correspondent. It was here that he made friends with other artists and writers who would shape his literary life. Among them were Ezra Pound, James Joyce, F. Scott Fitzgerald, and Gertrude Stein, who became his mentor for a time. He was a key part of what Stein called ‘The Lost Generation’, which was the generation that came of age during World War 1 and bore its mark indelibly.

His writing style is distinctively lean and economical. This is thanks to his journalistic background and his willingness to swim upstream from the elaborate prose popular in his day. His tight style and declarative sentences changed the landscape of American literature, and his writing continues to impact readers and writers alike.

If you want to write a book, sign up for our online course.